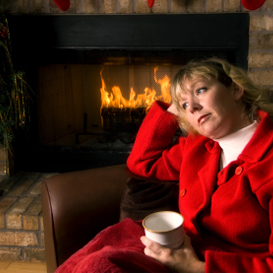 We’re now at the height of winter – temperatures are staying low, the days are at their shortest and the sky is most often just a sea of grey clouds. If this time of year tends to make you feel depressed, you’re not alone. According to the National Center for Biotechnology Information, around 14 percent of adults in the U.S. suffer from seasonal mood changes or “winter blues.” Six percent are thought to suffer from full-blown seasonal affective disorder (SAD). In addition to typical depression symptoms such as low energy, feelings of hopelessness, difficulty concentrating and irritability, seasonal affective disorder patients can suffer from weight gain, oversleeping and a feeling of heavy or “leaden” extremities. People who live farther north in the country are much more likely to suffer from SAD. Unfortunately, the causes of seasonal effective disorder aren’t widely understood.

Lack of Sunlight Could Be the Main Culprit

It’s possible for people who work office jobs in northern climates get very little sunlight exposure for days on end. It’s dark when you wake up, dark during your morning commute and dark as you go back home. It’s hard to say exactly how a lack of sunlight affects mood and mental focus, but it may have something to do with vitamin D. Vitamin D is produced by the body after being directly exposed to sunlight, and it’s essential for maintaining calcium levels in the body. This is why sufferers of seasonal affective disorder are also at risk for poor bone health. In addition, there is evidence that vitamin D can boost your immune system, prevent diabetes and even lower the risk of Alzheimer’s. As far as SAD is concerned, some people believe that vitamin D can help regulate brain chemicals such as melatonin and serotonin. This hasn’t been backed up by much research, however.

Sunlight also plays a part in sleep cycles. The body’s natural tendency to wake when it’s bright and sleep when it’s dark can become disrupted during the long nights and short, grey days of winter. Indeed, shift workers can be very prone to depression and insomnia for this reason.

If a lack of sunlight and vitamin D really are the reasons for seasonal affective disorder, there are several strategies that can help combat the symptoms. Many people use “light boxes,” which are large lights that mimic sunlight. This light therapy is typically used in the morning for about 30 minutes in order to stimulate your natural circadian rhythm and sleep cycle.

Simply getting some exercise can also help with SAD. Exercise is well-known to help with depression symptoms, and you can get the benefits of sunlight exposure and vitamin D production if the exercise is performed outside. Talking a walk or run during your lunch break might be the best bet, as mornings and evenings are typically too dark this time of year to get any sun.

Maintaining a regular schedule can also help. Try eating meals at exactly the same time each day while also waking and sleeping at consistent times if possible. If all else fails, talk to your doctor about vitamin D supplements or antidepressant options. If possible, taking a vacation to a warm, sunny climate could also help.

Seasonal affective disorder affects women almost four times as much as men, which is another aspect of the condition that is not widely understood. However, exercise, vitamin D supplements and sunlight (real or simulated) could go a long way towards fighting the symptoms of SAD, despite the relatively low amount of research done on their effectiveness.