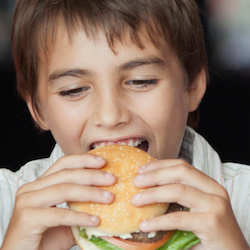 Everybody knows that fast food is bad for your health. Eating too much of it can lead to all sorts of health conditions such as obesity, high blood pressure and high cholesterol – all of which are serious risk factors for heart disease and diabetes. There is some hope on the horizon, though. Some studies show that calories are dropping in general among fast food items. Also, with calorie counts becoming mandatory in many restaurants, people might start making smarter choices when eating out. But while much has been discussed about the physical aspects of junk food, the link between fast food and brainpower isn’t widely known. Does fast food have any effect on your ability to think and learn? Unfortunately, a new study says yes. Even worse, it seems to affect kids – eating too much fast food at a young age could actually impact test scores.

The new study, published in the journal Clinical Pediatrics, examined the academic growth of 8,544 American fifth graders who comprised a nationally representative sample. The students were asked how often they consume a snack or full meal from fast food chains such as McDonald’s, Burger King, KFC and Pizza hut. Fifty-two percent of students claimed to have eaten fast food between one and three times in the last week. Ten percent said they ate fast food four to six times, and another ten percent said they ate something from a fast food restaurant every day. Twenty-nine percent indicated they never ate fast food. After assessing test scores, researchers found that students who ate fast food averaged a score of 79 in reading. Children who did not eat fast food averaged a score of 83. This disparity in scores was also found in math and reading. Researchers state that other potentially influential factors such as physical activity, TV watching and socioeconomic indicators were accounted for during the study.

So what causes the negative link between fast food and brainpower? Well, researchers have two theories. The first involves iron levels, which are notoriously low in fast food. It’s thought that a diet lacking in iron could cause certain brain processes to function more slowly. Also, researchers believe that fatty, sugary diets may simply just be a detriment to learning. Indeed, it seems that a healthy and active lifestyle has been shown to benefit brainpower in both adults and children.

The negative link between fast food and brainpower gets worse when considering that fatty, sugary diets can cause serious health conditions in children as well. According to the CDC, 70 percent of obese children have at least one cardiovascular disease risk factor. Obesity can also cause teens to develop prediabetes, which involves high blood glucose levels and a serious risk of developing full-blown diabetes. Not to mention, obesity can cause children to suffer from sleep apnea, poor self esteem, stigmatization and joint problems. In 2012, 18 percent of people aged 6 to 11 were considered obese. Twenty-one percent of people aged 12 to 19 were also considered obese that year, and it’s only gotten worse.

This study represents just another reason why it’s so important for children to avoid fast food as much as possible. Eating out every day could cause poor school performance in addition to poor physical health and an empty wallet. While home cooking is time-consuming and not practical 100 percent of the time, cutting down on fast food could be essential for keeping children healthy and intelligent.