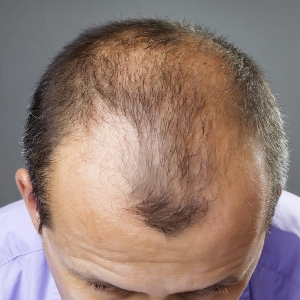 Are you a man over the age of 45? Are you going bald? If so, a prostate exam should be one of your top health priorities according to a new study published in the Journal of Clinical Oncology. The study suggests a significant link between male pattern baldness and prostate cancer, which is the most common form of cancer that American men are diagnosed with apart from skin cancer. In fact, prostate cancer is so prevalent that one in seven men will get it. Out of those, one in 36 will die because of it. As far as cancer deaths go, prostate cancer is second only to lung cancer regarding the amount of men it claims. At the same time, however, prostate cancer does have a generally high survival rate. If male pattern baldness and prostate cancer truly go hand in hand, it might at the very least give some men a warning sign that can lead to early treatment.

Scope of Study Was Vast

Researchers from the Cancer Prevention Institute of California studied 39,070 U.S. men who enrolled between the years of 1993 and 2001. Participants were aged 55 to 74, and they initially answered questions regarding the amount and type of hair loss they started to see at age 45. Around 18 percent of participants stated they had male pattern baldness at that age.

Association May Not Be Cause For Alarm

While one of the study’s co-authors claimed that baldness might eventually help doctors estimate prostate cancer risk, the research doesn’t necessarily mean we’re at that point just yet. The study certainly does not prove causation. Instead, it further solidifies the hypothesis that male sex hormones, specifically testosterone and dihydrotestosterone, can be linked to both male pattern baldness and prostate cancer development. In fact, some hair loss medications such as Propecia aim to restore hair growth by blocking such hormones’ effect on the skin. Also, genetics may play a role in the link. According to the senior study author, Michael Cook, there are “some overlapping regions of the genome that may be implicated in both of these conditions.” Not to mention, the study is a bit flawed in that it had test subjects relying on memory to assess their level of baldness years earlier.

Even the study authors suggest that more research must be done before we completely understand the link between baldness and prostate cancer. With almost 70 percent of men experiencing male pattern baldness during their lives, this study shouldn’t be cause for panic. At the same time, it could never hurt to talk to your doctor if there’s any concern.