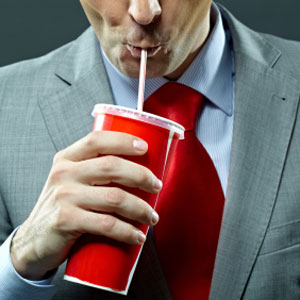 The effects of soda have been widely reported. From the famous “what happens to your body when you drink a Coke” story to the proposed New York City ban on soft drinks larger than 16 ounces, it’s safe to say that most people are at least slightly aware that soda isn’t good for your health. And yet we drink it anyway. In fact, according to some sources, the average American drinks around 44 gallons of soda each year.

Aside from the caffeine, which researchers go back and forth about, there’s no doubt that many of the negative effects of soda come from one thing: sugar. Too much sugar in the diet can lead to all sorts of problems like diabetes and obesity. The good news is that, according to new research, the effects of soda can be counteracted simply by walking. The bad news is that it will take a lot of walking.

The research, conducted by Amy Bidwell at Syracuse University, was aimed at finding a link between between physical activity and fructose. Fructose, unlike sucrose (table sugar), is metabolized mostly in the liver and can cause all sorts of metabolic problems after being processed and entering the bloodstream as a fatty acid. Bidwell found 22 college-aged men and women, and researchers recorded their health information including insulin levels, blood sugar levels, cholesterol profiles, typical diet and normal activity levels.

Throughout the study, participants consumed 75 grams of fructose per day in the form of a lemon-lime soda. The soda also had 250 calories. For the first two-week period, half the participants cut their physical activity levels in half while the other group raised their activity levels to at least 12,000 steps per day. After a week of rest, the two groups switched roles for the next two-week period. So, every participant was active for two weeks and sedentary for two weeks.

Two separate studies analyzed this research. The first study concluded that the otherwise healthy participants endured an increase in low-density lipoproteins and a drastic, 116-percent jump in markers of bodily inflammation during their periods of inactivity. The second study found that when the volunteers were inactive, they ended up with clear signs of incipient insulin resistance – the first marker of developing type 2 diabetes. However, both studies found that walking the 12,000 steps just about eradicated all the negative effects. Seeing as 75 grams of fructose is the amount that a typical American gets every day, we can come to this conclusion: according to these studies, walking 12,000 steps per day can counteract the negative effects of soda. This comes out to walking about six miles per day.

Better to Just Kick It Completely?

Six miles per day means different things to different people. Some individuals might get that amount of exercise during the day anyway, while others would consider it to be a monumental undertaking. So, instead of trying to add 12,000 steps to your daily routine, the recommendation is to just cut back on soda altogether – and major health organizations agree. Back in March, the World Health Organization proposed that people should be getting only 5 percent of their total daily calories from sugar. This would end up being about 25 grams of sugar for a typical adult; meanwhile, just one can of regular soda has around 40 grams. If you want to follow the WHO’s recommendations, it’s perhaps easier to just stop drinking soda for good.

Effects of Soda: The Bottom Line

Between the risks of obesity, diabetes, heart problems, liver conditions, cavities, gout, increased appetite and even addiction, it’s clear we need to stay away from sugar. While these studies show that regular physical activity can reverse some of the harmful effects of soda, it might be best to do both: cut back on sugary drinks and start taking a daily walk.