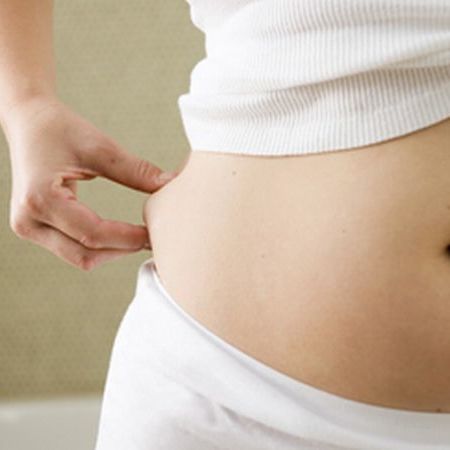 Americans keep getting bigger around the middle, and it’s definitely cause for concern. Abdominal obesity, also called central obesity, belly fat, beer belly or pot belly, is one of the most dangerous forms of obesity. Associated health risks include type 2 diabetes, heart disease, hypertension and asthma. Abdominal obesity is also a symptom of polycystic ovary syndrome and Cushing’s syndrome. While the obesity statistics have been high in America for years, a recent report in The Journal of the American Medical Association states that the problem is now as dire as it’s ever been. Get ready for this: over half the U.S. population now has abdominal obesity. To be exact, 54.2 percent of Americans suffer from the condition – up from 46.4 percent about a decade ago. This is in spite of the fact that overall obesity levels have generally leveled off. Also, the average American waist size went from 37.6 inches in 1999 to 38.8 in 2011-2012.

What’s Causing All This?

A male has abdominal obesity when his waist circumference is greater than 40.2 inches. A woman is considered abdominally obese when her waist measures 34.6 inches or more. So why did we get this big in the last ten years? Unfortunately, the researchers who compiled the most recent data don’t exactly know. Some of the theorized causes include:

Of course, the most obvious answer is “lack of exercise.” But if this were the case, why would overall obesity levels stay the same instead of increasing during the same time period? According to Dr. Earl Ford, the lead author of the study and a researcher at the Centers for Disease Control and Prevention, it’s possible that a lack of exercise can cause fat to accumulate but not necessarily affect overall body weight due to the fact that fat is lighter than muscle.

Reducing abdominal fat is tricky because it includes both subcutaneous fat, which is fatty tissue just below the skin, as well as visceral fat, which is deep inside the abdomen and surrounds internal organs. While subcutaneous fat is troublesome cosmetically, the visceral fat presents even more of a health risk. So, in order to reduce visceral fat and curb the disturbing abdominal obesity trend, Americans need to know the following prevention strategies:

It takes a lot of time and dedication to eliminate belly fat. Contrary to what Internet ads might tell you, there is no “one weird trick” or “miracle skinny pill” to eliminate abdominal obesity. Prevention is the key: if you think you’re starting to get heavy in the mid-section, start following these tips immediately.