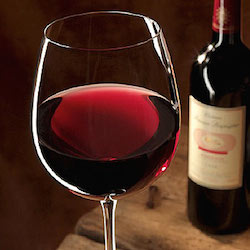 The healthiness of red wine is a hotly debated topic in the health world. Many health professionals suggest that having a glass of red wine every day can prevent heart problems. It’s thought that the antioxidants in red wine, in addition to the small amount of alcohol, could help prevent heart disease by increasing high-density lipoprotein (HDL) levels. HDL, also known as “good” cholesterol, is thought to prevent artery damage. At the same time, some studies suggest that the link between red wine and heart health could more accurately be attributed to genetics.

Either way, red wine could still have health benefits that don’t directly relate to the heart. For example, some researchers suggest that red wine could protect against Alzheimer’s and perhaps even aid in cancer treatment. Now, a new study shows that red wine might help an overweight person burn fat as well.

The new study, published in the Journal of Nutritional Biochemistry, used mice to test the effects of ellagic acid. This acid is found in Muscadine and pinot noir grapes, which are commonly used to make several different types of red wine. Extract taken from these grapes was given to a group of mice over a 10-week period. A different group of mice was not given the extract. However, both groups were fed a high-fat “mouse-chow” that increased liver fat, blood sugar and overall body weight. After the trial was over, it was found that mice who consumed the grape extract had far less liver fat and blood sugar than the mice who did not. They also had more proteins that are known to metabolize sugar and fat in body cells. Mice who did not get the grape extract had fattier livers and diabetic symptoms, similar to what is often seen in overweight humans.

It should be noted, however, that the researchers did not necessarily suggest red wine could assist with weight loss. Instead, the acid found in certain grapes could aid in the burning of fat within the liver, potentially helping overweight people manage their obesity and any metabolic disorders they may be suffering from as a result. For humans, the amount of ellagic acid the mice received is equal to about 1.5 cups of grapes per day.

Of course, too much alcohol is never a good thing. One glass per day is likely the best solution, as the calories from wine could add up and defeat the purpose of drinking it for health reasons. For example, if a person is on an 1,800-calorie diet plan, only 195 calories are typically set aside each day for discretionary eating. This means that an individual could have about a 9 oz glass of wine – and nothing else. The second you go above your diet plan, you’ve lost the fat-burning benefit of red wine and will have to exercise more to make up for it.

For now, it seems that the recommendation of having a small glass of wine on a regular basis is a solid one. Despite some studies suggesting otherwise, there is plenty of evidence that a bit of red wine could promote heart health. Now, we can also consider red wine to be promoting liver health as well – as long as the amount of alcohol consumed does not start damaging the liver. Unfortunately, this study does not prove that red wine can help you lose a significant amount of weight.