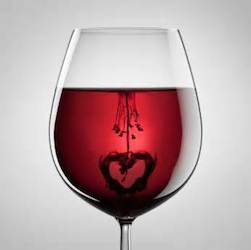 The results of a new study indicate that it might be time to add red wine to the list of foods such as milk and eggs whose health benefits are famously debated. It’s been generally thought for years that a positive link between alcohol and heart health can exist when alcohol is consumed in moderation. We’ve been told that some forms of alcohol, especially red wine, can reduce the risk of certain types of stroke, heart attack and vascular disease, leading to the thought that a daily glass of wine could be healthy.

In fact, the Harvard School of Public Health claims that over 100 studies have shown a link between small amounts of alcohol and heart health, often concluding that the risk of certain conditions can be reduced by anywhere from 25 to 40 percent. Now, however, a new study published in the British Medical Journal is throwing a wrench in the gears.

Researchers from Penn Medicine conducted the large study, which included a meta-analysis of over 50 studies and involved nearly 262,000 participants. The DNA of study subjects was taken into account. Specifically, researchers singled out participants who carried the “alcohol dehydrogenase 1B” gene (ADH1B), which causes people to break alcohol down more quickly than others. This more rapid metabolization leads to these gene carriers feeling the negative effects of alcohol more quickly. Naturally, people who are quicker to vomit, feel nauseous, or blush tend to drink much less.

It was discovered that people who carry the gene, and therefore consume less alcohol, had a 10 percent reduced risk of coronary heart disease even when compared to those who drank moderately. A moderate amount of alcohol was considered to be 0.6 to 0.8 ounces daily. In addition, the gene carriers tended to have lower BMI and blood pressure.

This also means that the type of alcohol consumed doesn’t make much difference. While it might be assumed that a glass of red wine would still be more healthy than something like a beer as far as cardiovascular health is concerned, the study suggests that consuming alcohol in any form can lead to heart problems.

Limitations of the Study

An editorial written by M Maria Glymour, a University of California San Francisco professor, was also published in the BMJ. It outlines some of the major flaws of the study, chief of which is the fact that ADH1B’s effect on heart health was not studied independently of alcohol consumption. In other words, the gene may have some sort of positive effect on cardiovascular health on its own. At the same time, the professor stated that the study was “innovative” and that more conventional methods of conducting this type of study wouldn’t necessarily be any less flawed.

This new study challenges the claim that a small amount of alcohol in one’s diet could contribute to cardiovascular health. However, more research will need to be done in order to completely refute the notion that there is a positive link between alcohol and heart health. For now, people will have to decide for themselves if their daily glass of red wine is really worth it. Either way, drinking heavily can still of course be very detrimental to one’s health.

The full study from the BMJ can be read here.