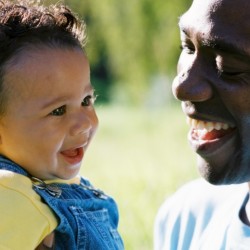 Several studies have shown how a parent influences infant vocabulary. For example, this landmark 1995 study showed that 86 to 98 percent of the words children use by the age of three came from their parent’s vocabulary. Also, infant vocabulary was found to be very similar to caregiver vocabulary in terms of average number of words used, speech patterns and duration of conversation. This may seem like common sense, but it has serious implications when considering what the study also found: the vocabulary knowledge at age three was a predicting factor in language performance at ages nine and ten. In other words, a child’s vocabulary at age three is a good indicator of their language development, vocabulary and reading comprehension many years in the future. Now, a new study is claiming that dads may need to pick up some slack in this department.

The new study, published in Pediatrics, aimed to evaluate how mothers and fathers differ in verbally interacting with their young children. Researchers assembled a group of 33 babies and their parents. They attached small recording devices to the babies on a vest for four 16-hour periods. The recording periods occurred at different intervals, including when the babies were just born, when they were still in the hospital, at 44 weeks old, and finally at seven months.

After recording around 3,000 hours of footage, it was found that mothers were much more likely to respond to verbal sounds. In fact, mothers responded to baby vocalizations at a rate of about 88 to 94 percent. However, fathers only responded 27 to 33 percent of the time. This isn’t necessarily surprising, as mothers are still likely to take on more responsibility when it comes to childcare. But again, the results are pretty dismal when considering that language interaction from both parents is needed in order for infants to grow into successful young adults.

Gender Plays a Role As Well

Actual interaction is essential for developing infant vocabulary and for a child to have success later in life. Simply putting on the TV will not help a child learn to communicate, as it provides none of the give-and-take or social cues of typical human conversation. According to this study, both parents – fathers especially – should try to increase responses and vocal interactions with their young children regardless of the child’s gender.