Alzheimer’s Prevention – Yet Another Reason to Exercise 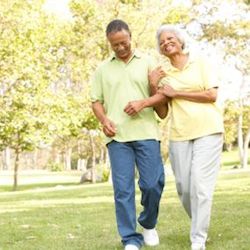 Alzheimer’s disease is a devastating condition that affects both the sufferer and the community of people around them. According to the National Institute on Aging, it’s estimated that around 5.1 million people in the U.S. suffer from the disease, which can eventually cause a person to lose certain thinking, reasoning, memory and behavioral abilities. Health-conscious individuals often begin to think about Alzheimer’s prevention during middle age, as the symptoms of the disease typically start to appear around age 60. While it’s often been thought that more and more people end up suffering from Alzheimer’s simply because we’re all living longer, some new studies indicate that the condition could be somewhat easily preventable. It should come as very little surprise that a healthy diet and a decent amount of exercise play large roles in Alzheimer’s prevention.

According to a recent study conducted in Finland, there’s no single tactic that can prevent Alzheimer’s completely, but an array of strategies could have a significant impact. Researchers from the National Institute for Health and Welfare in Finland and the Karolinska Institutet in Sweden tested 1,260 people aged 60 to 77 over a period of two years. The participants were considered to be at high risk for developing dementia due to factors such as heart health and education level. Half of the individuals were randomly chosen to receive assistance with a “lifestyle makeover” that included:

The participants that stuck with the plan ended up doing much better on memory tests after the two-year period was over.

A Third of Alzheimer’s Cases Could Be Preventable

A completely separate study recently conducted at the University of Cambridge indicates that some of the main risk factors for Alzheimer’s include lifestyle elements that are known to be modifiable. Researchers looked at population-based data and concluded that the main risk factors include:

Again, a decent amount of daily exercise could minimize the chances of developing many of these factors, namely inactivity, obesity, diabetes, hypertension and even depression. Low education level, and especially smoking, are also considered to be risk factors that people have control over.

While it’s generally accepted that unchangeable genetics play a role in developing Alzheimer’s, these recent studies show that maintaining a healthy lifestyle into old age are definitely worth a try for those at risk. A plan involving exercise, social activities, brain training and a healthy diet may not exactly be easy for senior citizens, but a helpful group of family and peers could ensure that the at-risk individual gets the help and motivation they need to prevent this debilitating condition.