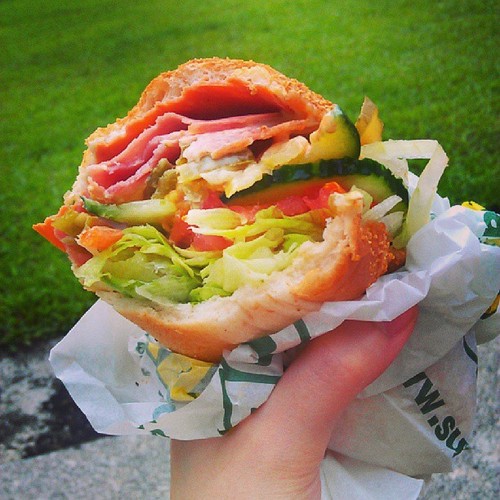 Despite many fast food restaurants making nutritional information more visible, the majority of fast food eaters believe their meals contain fewer calories than they actually do, according to a recent study by Harvard Medical School.

About 3,000 customers ranging from teens to adults to parents of young kids participated in the study, which included restaurants such as Dunkin’ Donuts, KFC, Wendy’s, Subway, Burger King and McDonald’s. Approximately 66% of the participants believed their meals contained fewer calories than they actually did.

Subway: As Healthy as You Think?

People most often underestimate calories at Subway, where average guesses undercut actual caloric values by about 25%. Teens had an especially large misconception of caloric values at Subway, estimating their sandwiches to be about 500 calories lighter than they actually were.

The question is, why do so many people underestimate so drastically at Subway? According to researchers, the chief reason may be Subway’s aggressive marketing campaign aimed at promoting their low-calorie options. Of course, not all sandwiches sold by Subway are low in calories, despite the fact that Subway’s low-cal messaging is at the front of many patrons’ minds.

According to Dr. Jason Block, one of the lead researchers behind the new study, ordering the foot-long version of any sandwich is going to equate to a high-calorie meal, though many people do so anyhow because of its value-oriented pricing. Even if you steer toward veggie toppings and away from bacon and cheese, a 12-inch sandwich still packs a lot of calories due to the bread alone.

Although virtually all chain restaurants reveal their nutritional information online, that doesn’t help customers who are actually in the restaurant looking at the menu. Soon, this will change thanks to new FDA regulations requiring restaurants with at least 20 franchise locations to post caloric information on menus. If you’ve been to a McDonald’s restaurant in recent months, you’ll have noticed the change in effect already. Although some studies have already indicated that posting caloric values on menus doesn’t change consumer behavior, this may change once more restaurants comply with the new regulations.

Most consumers underestimate the caloric values of their fast food meals, though new FDA regulations will eliminate the guessing game.