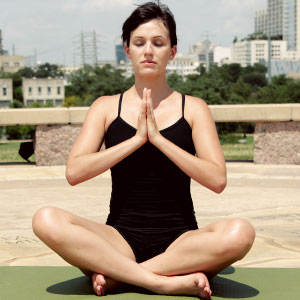 Depending on the type of yoga performed, it’s often thought to lower the risk of certain conditions such as high blood pressure and heart disease. It can also lead to a more flexible body that’s less likely to sustain injury.

A new report by researchers at Duke University indicates that engaging in yoga may also help to alleviate certain psychiatric disorders. In order to create their report, researchers looked at 16 existing peer-reviewed studies that sought to identify how performing yoga can influence mental illness. Based on their analysis of these studies’ findings, the researchers determined that yoga can improve depression and sleep problems in individuals even in the absence of medication. Further, they found that yoga can alleviate ADHD and schizophrenia in people who are taking medication to treat these disorders.

Reductions in Depression, Improvements in Sleep

A separate study focused on 39 adults who were receiving chemotherapy and experiencing sleeping difficulties as a result. In these individuals, weekly yoga for seven weeks resulted in less need for pharmaceutical sleep aids and higher-quality sleep. Again, the control group in this study experienced no improvements in their sleeping patterns, nor did they require fewer sleep aids to help them snooze.

As Good as Antidepressants?

According to medicine and psychiatry professor Dr. P. Murali Doraiswamy of Duke University Medical Center, the studies reviewed indicate that yoga can have a positive effect on brain chemistry and bodily inflammation, similar to how psychotherapy and antidepressants affect the same.

However, the NCCAM, or National Center for Complementary and Alternative Medicine, cautions individuals that yoga is not a sufficient replacement for conventional medical care. If you have a medical condition, it’s important to talk to your doctor before beginning a yoga routine. You should tell your doctor about any alternative health practices you engage in, according to the NCCAM.

Limitations of the Review

Yoga for Sleep Disorders and Depression: The Bottom Line

Yoga may be beneficial for people with ADHD, sleep problems, schizophrenia and depression, according to a new review of 16 studies by Duke University researchers. The full text of the review can be found online in the medical journal Frontiers in Psychiatry.