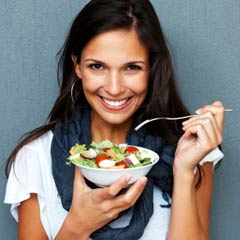 Dieticians offer many different strategies for kicking an overeating habit, many of which are fairly simple. For example, it’s been suggested by the British Journal of Nutrition that people who regularly eat breakfast in the morning eat less throughout the day. Eating a balanced breakfast of at least 250 calories each day could help reduce your ongoing appetite. Preparing breakfast before bed might ensure this for people that have busy mornings.

Also, studies have suggested that people tend to overeat when they’re distracted. Luckily, taking tinier bites of food during a meal could offset the effects of distracted eating, according to a new study by researchers at Wageningen University in the Netherlands. If you plan to watch a movie or your favorite reality show while you’re eating dinner tonight, it might be wise to choose a smaller fork if your goal is to stop overeating.

A total of 53 individuals between the ages of 18 and 35 were included in the study – all of them healthy and of a normal weight. The study participants were asked to take sips of soup as they watched an animated movie. During the first two days of the study, each individual sip was predetermined to be either 0.2 ounces or 0.5 ounces, considered “small” and “big” sips, respectively. During the third and final day of the study, subjects were allowed to take whatever sized sips they liked. On all three days, subjects were asked to stop eating whenever they felt full.

The researchers also noted that people ate less soup when told to focus on the soup’s flavors than they did when actively paying attention to the animated movie.

The researchers have concluded that people can mitigate overeating by taking smaller sips or bites of food. This can be accomplished simply by using a smaller fork or spoon. The researchers say that taking small bites increases the number of swallows and bites involved in a meal, which could lead to earlier hunger satiation.

The study did have one notable drawback in that some of the individuals who took small sips stopped eating before they were actually full because they disliked the mechanism by which the soup was measured and dispensed. However, the link between smaller bites and lower overall food intake remained even when accounting for this factor.

How to Stop Overeating: The Bottom Line

Taking smaller bites or sips of food may reduce the overall amount of food you consume in a meal, according to a new study by researchers in the Netherlands. If you’re struggling to lose weight, your efforts may benefit from the use of smaller forks and spoons during a meal.

The full text of the study can be found online in the medical journal PLoS ONE.