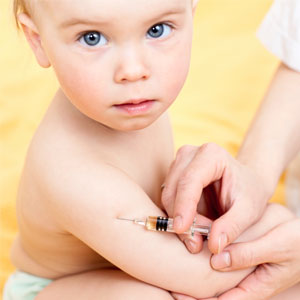 A new report published in the Pediatrics medical journal concludes once again that the benefits of getting your child vaccinated far outweigh the risks. Researchers from the RAND corporation analyzed 67 different research studies and concluded that serious side effects due to immunization are “very rare.” The results echo similar findings presented by the Institute of Medicine almost three years ago.

While most people likely won’t be surprised by these results, the study is still a very important step in curbing the belief that vaccines cause autism. Due to outspoken anti-vaccine proponents, especially celebrities such as Jenny McCarthy, Jim Carrey and Kristin Cavallari, the U.S. is seeing a resurgence of preventable diseases due to parents’ fear that their children will end up being developmentally disabled if they are immunized.

The diseases whose numbers have rose above average in recent years include:

The Centers for Disease Control and Prevention is most concerned about measles. Cases have popped up in California, Illinois, Massachusetts, Ohio and, perhaps most worryingly, New York City. The U.S. reached 54 cases in the first two months of 2014, while the annual average is usually only around 60. By May 13, CNN reported that the measles outbreak in Ohio alone had climbed to 68 cases – the highest in 18 years. The disease is often contracted while traveling to other countries that have lower vaccination rates. Measles is very contagious and is known to cause death in one or two out of every 1,000 children who contract it.

Even more recently, the California public health department stated in June that the state is in the middle of a whooping cough epidemic. Over 3,400 cases have been reported in just the first half of this year. Again, whooping cough is an extremely contagious condition that can be harmful and even fatal to babies.

While the cause of this resurgence is multi-faceted and complex, two main reasons are often cited:

Vaccines do have some risks though, right? Well, yes. The study found that there may be a link between flu shots and fevers that can cause seizures, especially if the pneumococcal bacteria vaccination is received on the same day. The measles-mumps-rubella vaccine can also cause fever-induced seizures. Also, a vaccine that prevents rotavirus comes with the risk of developing a certain type of bowel blockage. However, the report stated that the risk of these conditions is very low. For example, the rotavirus vaccine only caused the blockage in about five out of every 100,000 children immunized.

Vaccines are Safe: The Bottom Line

Researchers have stated time and again that vaccines are safe. While this latest study may or may not convince skeptical parents that they should get their children immunized, it should hopefully urge trusted medical professionals to insist on vaccination to those parents. A doctor’s opinion is the most effective factor in convincing parents to change their mind about vaccinations.

Jenna McCarthy’s famous but disproven claims regarding vaccines and autism can be found here.