Study Reveals the Most (And Least) Addictive Foods 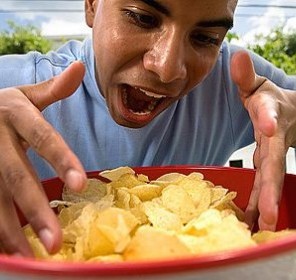 “Once you pop you can’t stop” and “bet you can’t eat just one” aren’t memorable potato chip slogans simply because they’re catchy or clever. A big reason behind the effectiveness of slogans that allude to the addictiveness of certain foods is the fact that they’re usually somewhat true. It doesn’t take a scientific study to know that some foods, especially snacks, have a quality that causes people to consistently crave their taste over a longer period of time. In fact, makers of addictive foods such as Doritos and Coca-Cola have figured out a specific formula for adjusting their products’ taste to achieve maximum addictiveness. This process usually involves actually suppressing much of the flavor, as flavors that are powerful and distinct actually help your brain decide to stop eating. Aside from specific brands, though, which food types are actually most addictive?

No Surprise: Pizza and Chocolate Are The Most Addictive

The new research, published in the journal PLOS One, sought to determine which types of foods cause people the most distress and lead to addictive behaviors. Researchers asked 504 test subjects to respond to questions on the Yale Food Addiction Scale regarding several different food items. The addiction scale asks participants how often they encounter certain situations such as, “I find myself constantly eating certain foods throughout the day” or “I find that when I start eating certain foods, I end up eating much more than planned.”

The scores for the various food types were then averaged and ranked within a seven-point scale. The most addictive foods and their associated score were:

The study also examined which foods were least addictive. They included:

Clearly, foods that cause people to eat to the point where it causes physical and mental distress have high fat and sugar content, as well as often being highly processed. It’s no wonder that pizza consumption was recently named one of the biggest factors contributing to childhood obesity.

Can You Really Be Addicted to Food?

When it comes to food, the word “addiction” is often only used in figures of speech, such as “I’m addicted to McDonald’s french fries.” Whether or not a person can be truly addicted to food in the literal sense is up for debate, but many studies suggest that it’s possible. This new study in particular indicates that foods high in fat, and especially sugar, can cause behaviors that mirror addictions to alcohol or cocaine. The study’s authors seem to suggest that treating obesity may necessitate using strategies similar to drug addiction treatments, rather than simply trying to adopt a new diet plan.

It can sometimes be difficult to discern whether eating an entire can of Pringles or bag of Oreos is a one-time binge or part of a larger addiction pattern. If you think you might have a food addiction, check out these questions from Foodaddicts.org. If not, it’s important to just stay vigilant and either avoid addictive foods altogether or try to consume them in moderation.