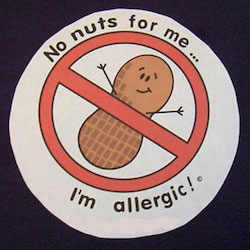 The number of people who suffer from allergies has skyrocketed in the last couple decades. Food allergies in particular now affect around 15 million Americans, and the number of children with food allergies increased by a whopping 50 percent between 1997 and 2011. Also, anybody who suffers from a food allergy knows that they’re much more than a simple annoyance. Food allergies lead to over 200,000 emergency room visits every year, and they can cause a potentially deadly reaction known as anaphylaxis.

The vast majority of food allergies are caused by wheat, shellfish, eggs, milk, soy, tree nuts, fish and, of course, peanuts. The number of people with a peanut allergy more than tripled between 1997 and 2010. While the typical prevention strategy for children has long been to simply avoid peanuts, a new study is saying just the opposite.

Early Consumption, Not Avoidance, May Be the Key

The new study, published in the New England Journal of Medicine suggests that exposing children to peanut products – not avoiding them – could lead to much more successful prevention. Researchers were initially interested in investigating this strategy after observing that Israeli children who began eating peanuts early in their life were 10 times less likely to end up with a peanut allergy than children in England were.

Babies ranging in age from 4 to 11 months were examined at the beginning of the study. Skin prick tests were used to determine each baby’s level of allergic reaction to peanuts. Babies found to have a strong reaction were not used in the study for safety reasons. Others were found to have a mild reaction or no reaction. The 628 babies deemed safe for study were randomly assigned into groups that either avoided peanuts completely or consumed the equivalent of 24 peanuts a week through a snack known as Bamba or simple peanut butter.

Children were given another peanut allergy test five years later. Among the mild peanut reaction group, 35 percent of children developed full-blown allergies if they avoided peanuts altogether. However, the children who did eat peanuts had an allergy rate of only 11 percent. This means that children in this group who ate peanuts were 70 percent less likely to develop a peanut allergy. Among children who originally had no reaction to peanuts, 14 percent developed peanut allergies if they avoided them. Only 2 percent became allergic if they were consistently exposed to peanuts. That’s a risk reduction of 86 percent.

Are We Too Clean?

This study seems to support the theory that allergies are increasing because our immune systems are being exposed to less and less germs early in life. It’s known as the hygiene hypothesis, and it simply states that as human society has become more “developed” and cleanly over the years, it’s caused our immune systems to miss out on building up protections against allergens. For example, a child that has very little exposure to pollen early in life could be more likely to develop an allergy to it. It’s only a hypothesis, but it does make sense considering how our immune systems work.

According to this research, parents should give their kids peanuts in order to prevent a dangerous peanut allergy, instead of avoiding peanuts as is commonly recommended. Of course, it’s incredibly important to consult a pediatrician before giving kids peanut products. Doctors may be able to use a skin prick test similar to the ones used in the study in order to determine if the child will have a bad reaction.