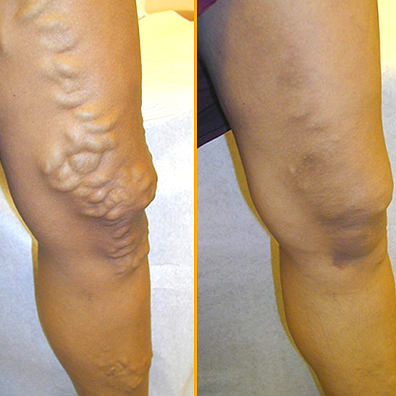 Anyone suffering from varicose veins knows how annoying and painful they can be. The twisted, enlarged veins often develop in the legs and feet, usually appearing as blue-green cords that bulge beneath the skin. Varicose veins are merely a cosmetic issue for many people. For others, however, the veins can cause pain, especially when standing or walking. While they’re rarely considered life-threatening, they are occasionally associated with complications including vein inflammation, venous eczema, blood clots, skin ulcers and leg swelling. Varicose veins aren’t uncommon either; in fact, according to the University of Maryland medical center, up to 60 percent of U.S. citizens suffer from them. Luckily, many varicose vein treatment options are available. But which ones are most effective? According to a new study, it might not make much of a difference.

The new study, published in the New England Journal of Medicine examined three of the most popular types of varicose vein treatments: endovenous laser ablation, ultrasound-guided foam sclerotherapy, and surgery. Researchers studied 798 people at 11 different facilities throughout the United Kingdom between November of 2008 and October of 2012. Each patients’ quality of life was assessed six months after their procedure. When it came to factors such as itchiness, swelling and pain, patients surprisingly reported nearly the same results regardless of the type of varicose vein treatment they received.

Of course, there were some differences in patient experience. For example, laser therapy was less likely to cause bruising or bleeding during the procedure. Also, patients that underwent foam injections reported slightly lower quality of life ratings. So, it would seem that laser therapy might be the overall best option. At the same time, researchers stated that the differences in quality were “minor” and not likely to have a large impact on the life of a patient.

How To Prevent Varicose Veins

Before varicose vein treatment becomes a necessity, there may be ways to ensure you don’t end up suffering from them. The veins typically form when tiny valves within them weaken, causing blood to succumb to gravity and flow backwards slightly instead of directly towards the heart. The condition is more prevalent in women, and they can be caused by a number of both preventable and non-preventable factors. For example, non-preventable risk factors for varicose veins include:

On the other hand, there are some factors for developing varicose veins that people can do something about. They include:

Basically, if you want to prevent varicose veins, you need to stay physically active. Walking or jogging even 30 minutes a day can have many positive effects on your health, especially if you’re getting older. This of course goes hand-in-hand with preventing obesity.

It seems that laser treatment may be slightly more effective than foam injections or surgery, but only marginally so. The study only examined patients after six months, however, so more research would definitely be helpful in determining which varicose vein treatment is best in the long run. As of now, patients might as well choose the most affordable option if they’re all going to be getting about the same results either way.