Pizza Singled Out As Top Contributor to Childhood Obesity 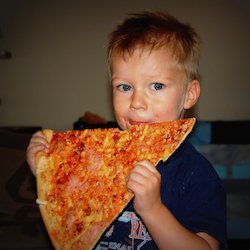 According to the Centers for Disease Control and Prevention, obesity rates have doubled for children and quadrupled for adolescents in the last 30 years. As of 2012, over one-third of both adolescents and children were obese or overweight. It probably goes without saying that those who suffer from childhood obesity endure a plethora of other health risks such as high blood pressure, high cholesterol, prediabetes, sleep apnea and joint problems. Physical activity and healthy eating are of course two of the most important factors for preventing childhood obesity, but many families and schools simply have difficulty developing overall lifestyle changes that prevent weight gain. But what if researchers could narrow down the causes of childhood obesity to one or two actionable strategies? Well, a new study in the journal Pediatrics has done just that. Put simply, kids need to eat less pizza.

How Much Pizza Are Kids Actually Eating?

Researchers from the University of Illinois at Chicago used National Health and Nutrition Examination Survey data to determine the impact that pizza consumption has on American children. The analyzed data involved 7,443 children aged 2 to 11 and 6,447 adolescents aged 12 to 19. It was found that, on average, the younger group of children consumed 83 calories of pizza every day, making up 5 percent of their total daily caloric intake. The older group ate 143 calories per day on average, which accounts for seven percent of their daily calories. It was also found that 22 percent of children aged 6 to 19 eat pizza on any given day. Overall, 13 percent of Americans consume pizza daily.

The good news is that pizza consumption rates do appear to be decreasing. According to the researchers, the numbers for 2003 and 2004 were actually quite higher, with younger children eating 25 percent more and teenagers eating 16 percent more during that time.

Eating Pizza Makes You Eat More Throughout the Day

Only one category of food – grain desserts such as cookies, doughnuts and cake – were found to be more popular for kids than pizza. Despite some efforts to categorize pizza as a vegetable, everybody knows that pizza is not a healthy choice. In order to curb the troubling childhood obesity rates, researchers argue that marketing pizza to children should be more controlled. They also assert that pizza manufacturers should do more to cut calories from the food, schools should offer it less frequently, and children should be more informed of the potential dangers of overconsumption.