Health Benefits of Yogurt May Be Overstated 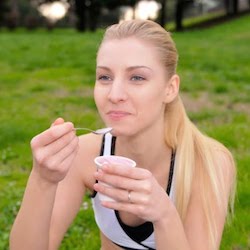 Over the years, there have been many foods that the scientific community considers healthy, only to later claim that they’re detrimental or have no effect. Interestingly, many of these foods fall into the dairy food group, the most notorious of which is eggs. For years, it seemed as though a new study would be published every couple of months that would reverse the existing notion of whether or not eggs could be considered healthy. Just three months ago, the new Dietary Guidelines for Americans was released, which contained a controversial lifting of cholesterol regulations that essentially means eggs can be considered generally healthy again. A similar problem exists with milk, which, despite being considered essential, has been found by some studies to actually be bad for you. Now, the health benefits of another exalted product, yogurt, are being called into question.

The new study, published in the Journal of the Academy of Nutrition and Dietetics, involved an analysis of the health data for 4,445 adults. Each study participant had their yogurt consumption tracked for an average of 3.5 years. In a find that contradicts previous studies as well as the prevailing general attitude towards yogurt, researchers concluded that people who ate yogurt were not significantly more healthy than anyone else. This was true in both physical and mental health categories. Even people who had no other risk factors such as chronic illness, smoking or poor diet showed any significant health benefits caused by regularly eating yogurt.

This study could be cause to re-evaluate dairy industry claims about the health benefits of yogurt. The U.S. Department of Agriculture is responsible for reviewing food industry claims, and if they find that yogurt does not actually provide some of the benefits professed by the dairy industry, they may choose prevent those claims from being made commercially.

Despite the results of this study, there’s plenty of other research out there that touts the potential health benefits of yogurt. Other studies have concluded that a diet including yogurt can:

Yogurt has also been known to act as a beneficial probiotic, which can help in the treatment of irritable bowel syndrome, Crohn’s disease and yeast infections.

Benefits of Yogurt: The Bottom Line

Yogurt may not be as beneficial as we think; however, that’s really no reason to stop eating it. After all, this study didn’t find that there’s necessarily anything harmful about consuming yogurt on a regular basis. Perhaps one of the best ways to get as much out of yogurt as possible is to eat unsweetened yogurt with fruit and berries instead of adding sugar to it.