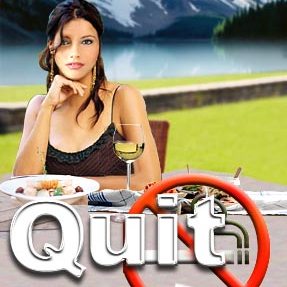 Plenty of rumors and myths nag those who look for a reason to quit smoking: you will gain weight (not necessarily true), you will battle food cravings for months on end (not true for most individuals), and you will become a crabby and irritable person without your constant nicotine crutch. While some ex-smokers do gain weight after kicking the habit, studies have shown that modifications to diet and exercise can curb post-smoking weight gain. Now, a new study is proving that third myth false as well. The findings of the study suggest that ex-smokers are happier overall than those who continue to smoke.

The study examined over 1,500 Americans who had participated in a smoking cessation trial. Researchers surveyed the participants in regards to their smoking status, as well as their reported quality of life, one year after the completion of the quit-smoking program. The same analysis was again applied three years after the trial’s completion.

In the context of the study, “quality of life” included factors such as personal relationships, life philosophy, self-image and physical and mental health.

Overall, the researchers found that those who quit smoking experience higher levels of happiness and life satisfaction than those who continue to smoke, especially on a long-term basis.

According to researchers, many smokers delay quitting or choose not to quit because they believe doing so will reduce their quality of life. They assume that quitting smoking will disrupt relationships and routines, remove one of their available sources of pleasure, and leave them without a way to cope with stress.

However, the results of the surveys indicated that none of these assumptions came true. In fact, ex-smokers scored higher when it came to factors such as positive emotions, health and overall life quality. These results were consistent at both the 1-year and 3-year markers.

In addition, researchers found that stress levels were significantly lower among those who had quit for three years. This is especially great news for those who primarily use smoking as a stress-reduction method but are still looking for a reason to quit smoking.

The authors of the study said that these findings could be incorporated into anti-smoking and smoking cessation education courses. They believe that smokers will be more likely to consider quitting if they’re privy to scientific research proving a quality of life upgrade among those who give up the habit. This certainly makes sense, given that many smokers feel that quitting would improve their physical health while sacrificing their enjoyment and pleasure.

The full text of the smoking cessation study can be found in the December 9th issue of Annals of Behavioral Medicine, a medical journal.

One Reason to Quit Smoking: The Bottom Line

If you’re a smoker, quitting is perhaps the single best thing you can do for your physical health. New research is proving that it could also be one of the most positive changes you could make for your mental health, including your perceived quality of life and overall happiness.

The study adds to a growing body of research linking quitting smoking with improvements in mental health, including a boost to your memory.