A Vegetarian Diet May Lower the Risk of Colon Cancer 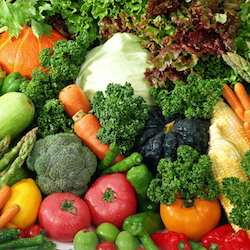 According to the Colon Cancer Alliance, colon cancer is the second leading cause of cancer-related death in both men and women in the U.S. It’s also the third most commonly diagnosed type of cancer. Risk factors often include age, ethnicity and family history. For example, over 90 percent of the people who develop colon cancer are over the age of 50, and the average age at diagnosis is 72. A person who has parents or siblings with colon cancer is two to three times more likely to develop it themselves. Sufferers of Crohn’s disease and ulcerative colitis may be more likely to develop the disease as well.

The problem with these risk factors is that they’re not necessarily controllable. There’s absolutely nothing you can do about your age or family history. However, as a new study reports, you may be able to control your colon cancer risk by avoiding one thing: meat.

The new study, published in the Journal of the American Medical Association, was massive in scope. Researchers from California’s Loma Linda University looked at the eating habits of almost 78,000 people for an average of 7.3 years. The people studied were members of the Seventh-Day Adventists, which is a religion that encourages healthy eating. Seventh-Day Adventists do not eat pork, and many of them avoid meat altogether. Overall, study participants were found to have eaten an average of around two ounces of meat per day. A total of 490 people developed colon cancer during the study. When comparing this number to the typical risk for meat-eaters, it was found that a plant-based diet led to a 21 percent reduced risk of cancer.

Different versions of the vegetarian diet performed differently, however. Interestingly, it was found that “pescovegetarians” – people who rarely ate meat but who ate fish at least once a month – had a 42 percent reduction in colon cancer risk. Researchers suggest that the omega-3 fatty acids found in fish could be key to cancer prevention. Indeed, previous studies have suggested that omega-3 fatty acid could have some anti-cancer effects.

Other Benefits of a Vegetarian Diet

Not everybody believes that plant-based diets are superior to diets that include meat. Some research has suggested that vegetarians actually aren’t much healthier than meat eaters and actually have a poorer quality of life overall. At the same time, many other studies suggest that plant-based diets have very beneficial health effects. For example, this study from April 2014 suggests that vegetarian diets lead to lower blood pressure. Another study from earlier this year claims that vegetarian diets often lead to lower body weights.

If colon cancer runs in your family, or if you’ve suffered from ulcerative colitis and are above the age of 50, this study suggests you may want to seriously cut down on meat consumption. Of course, it’s not always practical for people over 70 years of age to make a sudden, drastic change in their diet. For those people, this study simply cements an age-old and all-important health guideline: everything in moderation. Eating too much meat and too little vegetables not only increases the risk of colon cancer, but it can have many other detrimental effects as well. So, it’s best to at least try cutting down on the number of meals that include meat each week. Quitting smoking and getting more exercise will reduce cancer risk as well.