Omega-3 Supplements May Not Benefit the Brain After All 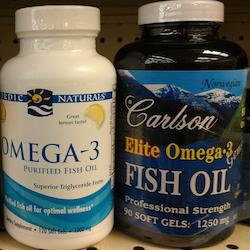 The benefits of Omega-3 fatty acids have been widely discussed in the past decade. Consuming foods high in Omega-3, such as salmon, tuna, mackerel, walnuts, flaxseed and soybeans, is thought to help prevent many different health conditions, such as arthritis, asthma, diabetes, eczema, depression, high blood pressure and osteoporosis. Omega-3 has even been shown to reduce breast cancer risk. But perhaps the most common belief about Omega-3 is that it’s good for the brain, helping to prevent Alzheimer’s and cognitive decline in general. This has caused fish oil supplements to become some of the most widely used supplements in the country. Unfortunately, most studies have only shown a correlation between taking fish oil supplements and having better health – not a cause and effect. Now, an actual clinical trial questions their benefits altogether.

Supplements Have No Cognitive Benefits

The new study, appearing in the Journal of the American Medical Association, examined the cognitive effects of Omega-3 supplements on over 3,500 test subjects who had an average age of 73. All of the participants were determined to be at risk for macular degeneration, an age-related condition that causes vision loss in older adults. Macular degeneration is known to increase the risk of cognitive decline. To start, the volunteers were given cognitive tests that evaluated their memory, attention and immediate recall. The same tests would be given two years later, then two years after that.

Test subjects were then randomly split into four groups. The first would take a lutein/zeaxanthin supplement, the second would take an Omega-3 polyunsaturated fatty acid supplement, the third would take both, and the fourth would take a placebo. After the four years had transpired, researchers discovered that the people taking Omega-3 supplements had not gained any “statistically significant” cognitive benefits whatsoever.

Omega-3 In Your Diet is Still Worthwhile

Even though the results were disappointing, researchers were clear about one thing: only the supplements were found to be ineffective – not Omega-3 itself. It may still be very advantageous to consume a healthy diet rich in Omega-3 fatty acids. As mentioned before, foods such as salmon, tuna, mackerel, walnuts, flaxseed and soybeans are great sources of Omega-3 fatty acid. Other such foods include:

Researchers also noted that age 73 may simply be too late for fish oil supplements to have an effect. It’s possible that younger people may still see some benefit from taking them.

This certainly isn’t the first time a supplement has been called into question. The effectiveness of supplements are still largely up for debate, and some have even had a history of ethical problems such as mislabeling. This study in particular, however, shows that anybody who’s relying entirely on Omega-3 supplements to get the benefits of fish oils should probably just start eating the foods that contain them instead.