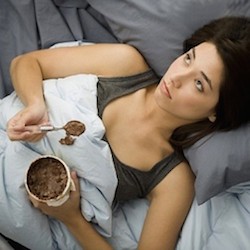 It’s a situation almost everybody has found themselves in at one time or another: you have a stressful day at work, you go home, collapse on the couch, and reach for the ice cream. Or potato chips. Or cookies. You end up eating most – if not all – of the pint/bag/box. If you’re trying to maintain a healthy diet, you’ve just obliterated any chance of meeting your daily goal. This phenomenon, commonly referred to as “stress eating,” “emotional eating” or, more colloquially, “eating your feelings,” is a real issue that’s been fairly widely studied. Most studies have shown that the stress hormone cortisol is responsible for stress eating. However, a new study published in the journal Neuron suggests that the problem is actually quite a bit more complicated. It also suggests that stress can lead to an overall reduction in self-regulatory behavior, which can affect more than just food choices.

For the new study, researchers from the University of Zurich found 51 young adult males who reported to exercise regularly and eat healthy diets, but also reported to enjoy junk food at times. Women were not included in the study due to cortisol’s tendency to interact with estrogen, which makes the study more difficult for researchers to control. The men were asked to rate images of 180 different food items by taste, healthiness and overall appeal. Twenty-nine men were then selected randomly from the original group to undergo a three-minute “stress induction procedure,” which involved immersing one hand in an ice bath while being monitored and videotaped. Then, all of the men were put in fMRI scanners, which monitors blood flow changes in the brain. Saliva samples were also taken during the course of the study to measure cortisol levels.

All 51 study participants underwent a seven-minute decision trial, in which the men were asked to choose between pairs of foods they had rated earlier. It was found that those who underwent the stress induction were much more likely to choose foods that they had originally deemed tastier rather than a more healthy alternative. Researchers noted that stress seemed to amplify the desire for short-term rewards while simultaneously impairing the influence of a region of the brain that contributes to self-control. Basically, stress can affect the brain in such a way that it becomes more difficult to resist the temptations of your favorite unhealthy foods.

While this study sheds light on how and why stress eating occurs, most people are well aware of the basic principle that stress can lead to poor diet. But isn’t it also possible that poor diet can lead to stress? Unfortunately, yes. According to the Stress Management Society in the UK, foods that can aggravate stress or anxiety include:

So how can a person avoid the vicious cycle of stress eating? Well, the researchers for this new study recommend one simple tactic: don’t keep unhealthy foods in your house. If you know that you tend to grab sugary, fatty snacks after a long day at work, you’ll be far less likely to eat them if they simply aren’t in your vicinity. Avoiding stress eating in the workplace can be significantly more difficult, but one of the best overall strategies is to just try reducing stress in your life as much as possible.