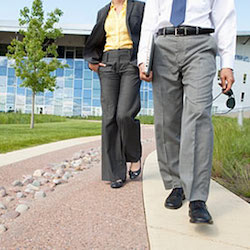 Everybody knows that sitting for long periods of time is unhealthy. Studies have shown that prolonged physical inactivity is one of the biggest causes of obesity – even more so than a poor diet. It follows that a sedentary lifestyle could lead to heart disease, hypertension, diabetes, stroke, sleep apnea, early mortality and many other conditions. Too much sitting has even been linked with higher rates of cancer.

With so many jobs now requiring employees to sit in front of a computer for hours every day, sedentary lifestyles are becoming more and more prevalent. It’s believed that a whopping 82.7 million Americans were completely inactive in 2014. Luckily, however, even small amounts of physical activity can be beneficial. According to a new study, as little as two minutes of light activity every hour could be quite effective.

Risk Of Mortality Decreases With Just a Little Activity

For the new study, researchers at the University of Utah examined 3,626 people using data from the CDC’s National Health and Nutrition Examination Survey. Participants wore accelerometers so that researchers could measure the amount and intensity of physical activity they were getting each day. Special attention was paid to light activity such as walking up or down stairs or taking a short walk for coffee.

Overall, it was found that generally sedentary people who regularly engage in walking and other low-intensity activities are 33 percent more likely to have a longer lifespan than other people who sit for similar periods of time. People who suffered from chronic kidney diseases had a 41 percent lower risk of death when they got up and moved around for just a couple minutes every hour. It’s important to note that no difference in health was seen among people who simply stood up for a few minutes, meaning that standing desks may not exactly be the perfect solution for staying healthy at a sit-down job.

Walking For a Few Minutes Isn’t Sufficient, Though

Walking around the office for a few minutes every hour is a great start, but it certainly doesn’t fulfill your body’s need for physical activity. If you’re awake for 16 hours each day, two minutes of walking every hour would lead to 160 minutes of light activity per day. However, official guidelines often recommend around 150 minutes of moderately intense aerobic activity each week. While the number of walking minutes does meet the criteria, simply going to get a cup of coffee could never be described as even moderate aerobic activity. Indeed, researchers have stated that the findings of this study should be used to raise awareness of the benefits of breaking up a sedentary lifestyle – not as a workout plan.

Try designating a time every hour where you can get up and take a quick walk around your home or office. Doing this may prevent all sorts of health problems. At the same time, don’t think that it will replace vigorous exercise. If you think you’re simply too busy to get any sort of physical activity during the day, check out our tips for getting a lunchtime workout or fitting exercise into your schedule.