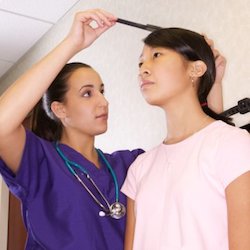 Heart disease can by caused by a number of fairly controllable factors. Eating a diet high in fat and cholesterol, smoking, and having high blood sugar are big risk factors that a person can avoid to an extent. High blood pressure due to poor diet or high levels of stress is also a somewhat controllable cause of heart disease in both men and women.

Unfortunately, there are also several factors that a person cannot control whatsoever. For example, family history can play a large role in heart disease risk. When a link between height and heart disease was suggested all the way back in 1951 by a now-famous cardiologist named Paul Dudley White, the idea wasn’t taken very seriously for decades. Now, however, it turns out that a gene associated with short stature may also be related to a higher heart disease risk.

It’s long been thought that the link between height and heart disease could be explained by poor diet, poverty or infectious diseases during childhood – factors that could cause both shorter stature and heart weakness. However, the new study, published this week in the New England Journal of Medicine, challenges those theories. Researchers studied 180 genetic variants in just under 200,000 people. Some test subjects had heart disease while others did not. Overall, it was discovered that a person’s risk of developing clogged arteries is 13.5 percent higher for every 2.5 inches shorter they are. This means that a person who is 5 feet 6 inches tall has a 30 percent lower chance of getting heart disease than somebody who is only 5 feet tall.

It was found that genetic variants causing shorter stature have been linked to higher levels of LDL and triglycerides, both of which can contribute to heart problems. This is strong evidence that there is in fact a genetic link between height and heart disease, rather than just an environmental link as was previously thought. It should be noted, however, that this genetic link was found predominantly in men. The connection was not deemed significant in the women who were studied.

Heart disease is still the number one killer of Americans, having claimed 787,000 people in 2011 alone. Cardiovascular diseases also cause more deaths than all forms of cancer combined. Also, around 720,000 Americans suffer from a heart attack every year – this means that a heart attack occurs in the United States once every 34 seconds. Not to mention, heart disease has led to over $320.1 billion in health costs and missed productivity.

With heart disease still being the most prevalent and deadliest condition in the U.S., this study should not be taken too lightly. While the genetic link may not be the most revelatory scientific find in recent memory, it nonetheless demonstrates the importance of understanding risk factors. If you or someone you love is at risk of developing heart disease and is of shorter stature, it may be even more important for them to consume a healthy diet low in cholesterol and sugar, as well as get a decent amount of exercise. These steps could be especially important if they’re male.