Which Comes First: Depression or Binge-Watching? 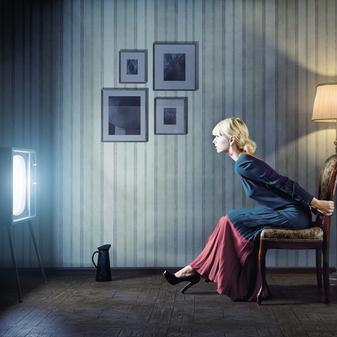 Americans watch a lot of television. According to TV measurement firm Nielsen, the average American watches five hours of TV every day, and we end up watching more and more TV as we get older. While it’s possible to watch a lot of TV and still be generally healthy, too much television has been linked with higher risks of cancer and early mortality. This is likely due to the physical inactivity associated with TV watching.

A relatively new concept, binge-watching, presents additional challenges. Streaming television services such as Netflix and Hulu allow users to spend hours watching episode after episode of shows like Orange Is The New Black or House Of Cards. Often, these services have an autoplay feature that loads the next episode immediately after finishing the last one. According to a new report, this type of TV watching is related to depression.

The new study, conducted by researchers at the University of Texas at Austin, involved 316 people with ages ranging from 18 to 29. Participants were surveyed with questions about their TV watching habits and potential depression indicators such as, “How often do you feel alone?” It was found that 75 percent of those surveyed have binge-watched television at some point. They also found that those who binge-watch are more likely to feel lonely or depressed. Binge watchers tended to have self-regulation deficiencies and were less able to control compulsions as well.

Researchers state that spending hours watching a whole season of a TV series is a way for lonely or depressed people to escape negative feelings. Indeed, the most popular television genres for binge-watching include comedy and romance. Interestingly, the researchers in the study admitted to having binge-watched some shows themselves.

It’s well-known that depression can go hand-in-hand with other addictive behaviors such as binge drinking and binge eating. While it might not seem like binge-watching could be as immediately harmful, it has been scientifically determined that long periods of physical inactivity can be incredibly dangerous. Sedentary lifestyles raise a persons risk of many conditions such as obesity, diabetes and heart disease. On the other hand, no research has yet been conducted regarding whether or not binge-watching itself can cause negative psychological issues. If a person also exercises regularly, binge-watching could possibly be considered a relatively harmless indicator of potential mental issues.

Binge-Watching and Depression: The Bottom Line

Again, the research only determines that there’s a relationship between binge-watching and depression, not that one causes the other. However, while researchers claim that binge-watching might be a symptom of depression, it could be argued that the reverse is true as well. Too much binge-watching can lead to long stretches of indoor isolation and physical inactivity – factors that certainly don’t help prevent depression. At this point, all anybody can really do is take a hard, honest look at their TV-watching habits and ask themselves if their behavior does or does not warrant an examination of their mental state.

One Response to Which Comes First: Depression or Binge-Watching?