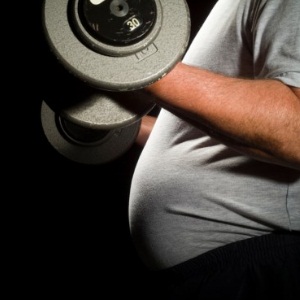 The study, published in the journal Obesity, analyzed a whopping 10,500 American males aged 40 and older. Research was conducted using Health Professionals Follow-Up Study data collected between 1996 and 2008. During that period, men were asked about the physical activities they devoted time toward. While the men were considered generally healthy, an expanding waistline is often considered a normal part of the aging process. Unsurprisingly, men who reported increasing the amount of time spent being sedentary experienced an increase in their waistlines. However, men who increased stair climbing and yard work time gained 0.16 cm less. Men who increased aerobic exercise, thought to be best for losing belly fat, gained 0.33 cm less in their midsection. Also, men who increased their time spent weight training had smaller waistlines at an average of 0.67 cm, meaning that weight training was over twice as effective as aerobic exercise.

Researchers at the Harvard T.H. Chan School of Public Health stated that waist circumference is superior to overall body weight as a measure of health while aging. This is due to the fact that skeletal muscle is often lost as a person gets older, meaning that weight loss can happen without being accompanied by any actual health improvements.

Not The First Study of Its Kind

As men get older, lifting weights may seem out of the question. However, getting into the habit earlier could prevent several health problems while keeping the body fit and functioning into old age. The new research from Harvard is surprising in that it suggests weight training could be more effective than aerobic activity. However, other studies have shown that lifting weights can also help prevent type 2 diabetes in men. There’s no doubt that a smaller waistline goes hand-in-hand with this diabetes prevention.

While this study shows how important lifting weights can be, it shouldn’t be considered a substitute for aerobic exercise. In fact, the men who saw the most benefit were the ones who combined both weight training and aerobics. The men in this study also lifted weights for about 20 minutes each day, so if you really want to prevent the expanding waistline that comes with getting older, 20 minutes of exercise daily would be a good place to start.