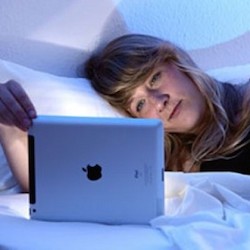 Living a healthy lifestyle requires making smart choices throughout the day. For example, choosing fruit over chocolate for a snack, taking the stairs instead of an escalator, planning out meals ahead of time and setting aside time for exercise are all little things that will have a positive impact. However, one element of health that could get overlooked among all these decisions is sleep. There’s no doubt that Americans don’t get enough – the CDC reported in 2012 that one-third of the population is sleep deprived. Also, it’s well-known that a lack of sleep weakens your immune system and raises the risk of diabetes and heart disease. Not to mention, if you’re trying to lose weight, sleep deprivation could make the process much more difficult. But the problem isn’t always just your amount of sleep – quality of sleep is important too. If you feel like your sleep quality is poor, you may want to limit your use of electronic screens before going to bed.

While the idea of reducing electronic screen time before bed might not be anything new, a new study published in a journal called Proceedings of the National Academy of Sciences of the United States of America suggests that the effect of electronic screens could be worse than previously thought. Researchers conducted the study at Brigham and Women’s Hospital in Boston, and the trial involved a 12-patient experiment carried out over two weeks. One group of participants read an ebook on a light-emitting device – referred to as an LE-eBook by researchers – for four hours before going to bed. The other group read a print book in dim light. The groups then switched during the second week of the study.

Participants who read an LE-eBook before sleeping were found to have reduced levels of melatonin, which is a hormone that usually increases at night and induces sleepiness. People who viewed electronic screens also couldn’t fall asleep as quickly and didn’t get as much REM sleep. REM (raid eye movement) sleep is important for protein production and sharp mental function. Also, people who read the LE-eBooks reported feeling less alert and more sleepy the next morning – even if they got eight hours of sleep.

Researchers also found that electronic screens can cause a patient’s circadian rhythm to be disrupted slightly. Circadian rhythm is essentially the body’s “clock” – it’s a fairly consistent cycle that regulates feelings of sleepiness and wakefulness each day. Again, this poor quality and reduced amount of sleep can exacerbate risks associated with diabetes, obesity and certain types of cancer.

iPads Used During the Study

The specific electronic screen used by researchers in this study was the iPad. But iPad screens are not unique – many smartphones, tablets, e-readers and laptops produce similar blue-light emissions. And it goes without saying how popular these devices are. A report from earlier this year states that the average American spends 162 minutes on a mobile device each day. According to this astounding report, Americans spend an average of 444 minutes (7.4 hours) looking at screens each day. This included 103 minutes in front of a computer and 43 minutes with a tablet. There’s no doubt that much of that time is spent in the evening or right before bed.

To avoid the negative effects of viewing electronic screens before bedtime, try to limit your exposure to them for at least one hour before going to sleep. If you enjoy reading in the evening, try reading print books or switching to an e-reader that uses an electronic paper effect rather than an LED backlight. Getting into this habit could help you get the quality of sleep needed to stay healthy.