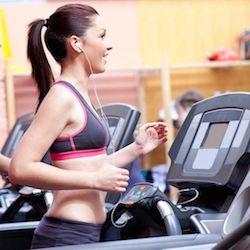 Researchers conducting the new study gathered 20 “moderately active” people whose ages ranged from 18 to 26 and who had no experience with interval training. The participants then engaged in four 30-second bouts of cycling with four minutes of rest between each bout. During the cycling, exercisers were instructed to go “all-out,” meaning they were to pedal as hard as they could at the highest intensity they could stand. Researchers monitored the volunteers’ power output, perceived exertion, perceived enjoyment and task motivation.

After the first round of exercise was complete, the volunteers provided the researchers with a list containing some of their favorite songs. Researchers then created custom playlists for each participant. The exercise sessions were repeated two more times – once without music and once with the volunteers listening to their unique playlist. After compiling their data, researchers did not note any increases in perceived exertion or task motivation. Perceived enjoyment, however, did increase during the sessions in which music was played. Interestingly, the volunteers’ power output also increased during sessions with music, meaning that music didn’t make it feel easier, but it did help them work harder. Participants unanimously indicated that exercising with music would be essential if they chose to pursue high-intensity interval training in the future.

Despite the fact that short, high-intensity workouts can be more effective while listening to music, casual exercisers may be wondering why anybody would push themselves that hard in the first place. Well, there are several reasons why high-intensity interval training is actually a very valuable fitness technique. First of all, it’s efficient. A typical workout of this style could easily be completed during a lunch break. High-intensity interval training has also been proven to burn fat more effectively, keep the heart healthy, increase metabolism and perhaps even prevent diabetes. Not to mention, this type of exercise doesn’t necessarily require equipment, meaning it can be done just about anywhere.

Exercising With Music: The Bottom Line

Let’s face it – extremely intense exercise can’t always be described as “fun.” This study shows that music might not make high-intensity interval training feel much easier, but it might be helpful for those who wish to push themselves to their limit. After all, pushing your body is an essential factor for getting real results when exercising, especially if you’re trying to build muscle or lose weight. At the very least, exercising with music could cause your enjoyment level to be increased enough to at least stick with a high-intensity routine for longer than you would otherwise.