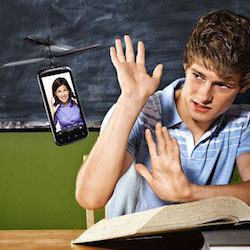 Now that it’s officially back-to-school season, parents and students across the country are adapting to all sorts of new changes. It goes without saying that parents of college freshmen often have to deal with the most drastic changes, including children moving away from home and having to take care of themselves for the first time. It’s in these situations that some parents become extremely overprotective of their children, warranting the derogatory buzz-phrase “helicopter parent.” Helicopter parenting got it’s name from parents who “hover like a helicopter” while their children are away at college or summer camp. Helicopter parenting actions include calling children to wake them up for class or contacting university personnel to confront them about grades. Many people believe that helicopter parenting is further spoiling an already entitled generation – but not everyone agrees.

In a recent opinion post appearing in TIME, author Nick Gillespie states that helicopter parenting has caused millennials to be overly self-absorbed. He points to a Reason-Rupe Poll that stated 65 percent of Americans think 18-to-29-years olds are “entitled.” The same poll shows that a whopping 71 percent of adults also believe young people to be “selfish.” Gillespie points out other results of the poll that he believes indicates a culture in which parents overly coddle their children. According to the poll:

Gillespie goes on to argue that kids don’t necessarily need these restrictions because the environment they’re growing up in is actually safer than ever. He also states that older generations could end up learning the negative effects of coddling children “the hard way.”

Another article in the Washington Post pointed out specific examples of helicopter parenting, such as a parent calling a college president to talk about an argument their child was having with a roommate. One professor from the Adler School of Professional Psychology stated that she had one parent go as far as to actually do her child’s homework. The professor stated that the child will sometimes have anxiety attacks when faced with any challenging task. Also, the article cites a California State University Fresno study in which it was determined that children of helicopter parenting had poor coping strategies, lower levels of self-efficacy, higher dependency on others and were lacking in “soft skills” such as conscientiousness and responsibility.

It Might Not Be As Bad As It Sounds

Helicopter parenting sounds bad, right? Add it to the list of other emerging buzz-phrases such as “snow plow parenting,” and it would seem that Americans have a full-blown crisis on their hands. At the same time, a dissenting opinion has been given by author and parenting expert Alfie Kohn. In an article also published in the Washington Post, Kohn argues that extreme cases of helicopter parenting are actually very rare. He points to surveys at the University of California and Michigan State, which show that both students and university personnel don’t actually encounter helicopter parenting all that often.

But what about the effects of helicopter parenting? Kohn argues that studies related to such effects are actually measuring how controlling parents are, rather than simple parental involvement. Kohn states, “If the problem is control rather than indulgence, that forces us to rethink the ‘coddled kids’ narrative offered by many critics of [helicopter parenting].” He also states that such studies don’t necessarily show that helicopter parenting is the actual cause the problems it’s often associated with.

It appears that helicopter parenting is indeed a serious issue that needs to be discussed. At the same time, it might not be causing an epidemic of child-spoiling that some media outlets would have us believe. In fact, according to a detailed post in The Economist, helicopter parenting is really only a concern in wealthier families. The article states that, while helicopter parenting gets much more attention, the fact that poorer parents have a very difficult time preparing their children for “a world in which the unskilled are marginalized” is much more troubling. Perhaps this is the issue we should spend more time talking about.