Low-Carb vs. Low-Fat Diets: Both Work for Weight Loss 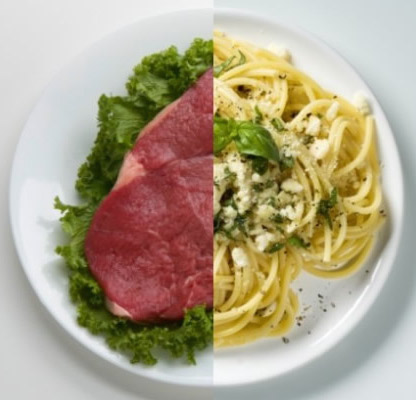 There are tons of different diet programs to choose from, and they all promise significant weight loss results. In fact, a large section of our website is dedicated solely to determining which weight loss programs are the most effective. For the past few years, however, there’s been a very specific debate regarding low-carb vs. low-fat diets. Which diets achieve weight loss faster? Which ones make it easier to keep the weight off? Which ones involve eating more nutritious foods?

It might now be time to put the debate to rest, as two new studies show that low-carb diets tend to help people lose slightly more weight over time. However, one of the studies in particular reenforces what is probably the best piece of dieting advice: many different diets can be effective, but only if you stick to them. Low-fat or low-carb will make no difference without commitment.

According to a new study published in the Annals of Internal Medicine, carbs have more of an effect on body weight than fat itself. Tulane University researchers conducted a year-long study including both African-Americans and Caucasians whose ages ranged from the early 20s to the mid-70s.

Researchers were not expecting such a large difference, but they did point to several other studies that have proven diets lower in carbs and higher in healthy fats can actually be beneficial in a number of ways. In fact, the low-carb group had better triglyceride levels, good cholesterol levels, and were even able to burn more calories every day.

Either Diet Can Work Though

While the difference of eight pounds is significant, it’s not exactly enough to recommend that every single person adopt a low-carb diet when they’re trying to lose weight. In fact, when it comes to low-carb vs. low-fat programs, there might not be any difference at all. According to another new study published in The Journal of the American Medical Association, both types of diets often end up having the exact same results. The study involved a meta-analysis of 50 clinical trials and 7,300 overweight participants. After six months, it was found that low-carb dieters averaged a loss of 19.2 pounds, while low-fat dieters averaged a 17.6-pound loss.

After a year passed, however, both groups gained back a portion of the weight. All participants averaged a loss of 16 pounds regardless of which diet they used. It’s crucial to note that this study only examined weight loss – it’s not currently known if the test subjects differed in things like blood sugar or cholesterol after dieting.

Simply put, low-carb and low-fat diets can both get results. This is good news because it allows people to potentially choose between diets that will not involve drastic changes in their existing eating habits. At the same time, a dieter must be paying attention to other health concerns such as blood sugar and cholesterol in order to ensure that their diet is not actually doing harm to their body while losing weight. This is why it’s always best to diet under doctor supervision.

Lastly, never forget that any dieting effort is pointless without exercise. Regardless of one’s diet, this fact will never change: physical activity is the key to losing weight.

16 Responses to Low-Carb vs. Low-Fat Diets: Both Work for Weight Loss