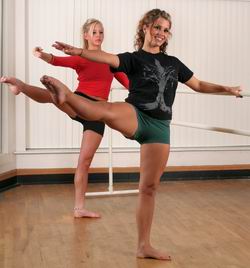 Dancing at a club or party can provide some unfocused cardiovascular exercise. Even better, other types of dancing can improve flexibility, increase core strength, and help burn calories. For younger people, however, the act of dancing may also have benefits beyond the physical.

For example, teenage girls can help alleviate mild mental health issues such as problem internalization just through dancing, according to a new study conducted at the Karolinska Institutet’s Centre for Health Care Sciences in Sweden. In the dance and mental health study, girls reported greater improvements in health after taking dance classes twice a week in comparison to girls who did not engage in dance. The findings suggest that dance is an excellent way to improve not only physical health but mental health as well.

During the study, Anna Duberg and a team of other researchers examined a total of 112 girls ranging in age from 13 to 18. The girls were divided into two groups, one of which engaged in two 75-minute organized dance classes per week for a total of eight months. At certain points in the class, the girls were asked to create original dance routines and share them with the rest of the group. The study lasted for a total of three years, with the girls in the dance group engaging in dance classes for eight months per year for the first two years.

All of the girls involved in the study had a mild mental health condition described by the researchers as problem internalization, which includes symptoms such as persistent exhaustion, low self-esteem and depressed mood. However, none of the girls had symptoms so severe that professional care was necessary. The condition is becoming more prevalent among teenage girls. However, mental health was not discussed during the dance classes, according to the researchers.

Improving Health Through a Positive Experience

In order to gauge how the dance classes affected the girls, the researchers asked them to rate their health on a scale of 1 to 5 before the first class. The researchers asked the girls the same question three additional times throughout the study. The final measurement was taken eight months after the dance classes had concluded. In each follow-up measurement, the health of the girls in the dance group showed more improvement than the health of the girls in the control group.

Perhaps better still, an astounding 91% of the girls in the dance classes said they viewed them as a positive experience.

The Link Between Dance and Mental Health

Although the researchers were unable to pinpoint exactly why dance led to improvements in the girls’ health, many possibilities exist. For one, it’s likely that the dance classes served as a relaxing contrast to school, since the classes were overwhelmingly rated as enjoyable and put very little pressure on the girls. The researchers also pointed to the social aspects of the classes, as they allowed the girls to make new interpersonal connections while doing something fun. In addition, it’s possible that the girls improved their self-esteem by successfully taking responsibility for choreography, music and other aspects of the class.

Of course, the girls were asked to rate their overall health and not just their mental health. One possibility is that the girls felt better about their health because they were engaging in about 75 minutes of exercise at least twice per week. According to the Centers for Disease Control and Prevention, 150 minutes of weekly exercise is the minimum recommended for adults.

Engaging in organized dance classes could boost both mental and physical health in teenage girls, according to a new study by Swedish researchers. The full text of the study is available online in the Archives of Pediatric and Adolescent Medicine.