Want to Lose Weight? Mindfulness Could Be the Key 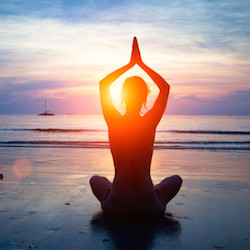 There are many factors that come into play when considering why you or someone you know may be overweight. Unhealthy lifestyle choices like smoking or not getting enough sleep can contribute to a high body weight, while medical conditions such as diabetes and high blood pressure can enable obesity as well. Of course, the most well-known factors for maintaining a healthy body weight involve getting enough exercise and regularly consuming a healthy diet. Apart from all of these, however, there’s one factor that is often overlooked when it comes to weight loss: the brain. Although it’s not widely understood, mental health issues such as depression have been linked to weight gain. This causes some to ask: could it be possible that the opposite is true as well? In other words, is a positive, in-the-moment mental outlook linked to lower body weight? A new study says it’s possible.

According to the new study, published last month in the International Journal of Behavioral Medicine, mindfulness could play a large role in weight loss. Due to the evolutionary history of humans, the researchers conducting the study believe that the brain directs us to eat as much as we can. This is due to a deep concern that we may not know when we’ll be eating next. Because early humans exerted so much energy hunting, our brains are also designed to encourage rest when possible, which causes us to often feel averse to exercise. What this all boils down to, researchers say, is that we must mentally fight our basic instincts in order to eat healthier and exercise more. Mindfulness, living in the moment, and paying close attention to our bodies’ signals can help prevent becoming overweight.

To test this hypothesis, researchers studied 394 people with a median age of 47. These participants were given a survey known as the Mindful Attention Awareness Scale, which contains 15 statements such as “I could be experiencing some emotion and not be conscious of it until some time later,” or “I forget a person’s name almost as soon as I’ve been told it for the first time.” Participants answered each statement using a number 1 through 6, where 1 means “almost always” and 6 means “almost never.” After the data was collected, researchers found that people who scored lowly on this test were 34 percent more likely to be obese, in addition to having an average of one pound more belly fat than those who scored highly.

How Can You Become More Mindful?

When it comes to your diet, you can increase your mindfulness by simply taking a moment to listen to your body before indulging in something like cake, candy or fast food. You’ll probably find that, many times, you do indeed want to eat the unhealthy food you’ve been presented. However, taking a second to ask yourself why you’re choosing to eat unhealthily may make you realize that you actually don’t want to consume the cake, candy, soda or whatever the poor diet choice may be. Just taking a brief moment to consider the impetus behind your impulses may go a long way towards helping you become more mindful, regardless of the outcome. And the more mindful you become, the better chances you’ll have of making the right decisions in the future.

The three main tenets of mindfulness are self awareness, emotion regulation and attention control. Improving these aspects may not only help you watch your waistline, but they could also positively affect personal relationships, decision-making, attitude and many other facets of your life. The path toward becoming more mindful can begin by simply starting to meditate every now and then.

While this study was small, it simply makes sense that being more mindful would be linked to eating more healthily. Taking a moment before impulse eating to try controlling your behavior could go a long way toward eliminating the less healthy foods in your diet. Meditating and analyzing the reasons behind poor lifestyle choices could also set you on the path toward correcting them.