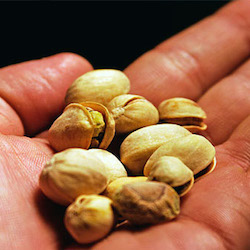 A varied diet consisting of nutritious food is key for living a long, healthy life. Some foods in particular are well-known for promoting longevity due to their ability to help the body prevent disease, maintain a healthy weight, and improve overall health. For example, eating foods high in omega-3 fatty acids such as salmon and other fish have has been widely associated with a longer lifespan. Other foods such as blueberries and green tea have been known to promote a longer life due to the antioxidants they contain. The probiotics in yogurt could also help a person live longer, as could just about any food that’s been known to lower blood pressure and reduce the risk of heart disease.

According to a new study appearing in the International Journal of Epidemiology, we can now add one more potential superfood to the list: nuts. The study shows that nuts could reduce the risk of mortality caused by cancer, heart disease, stroke, brain diseases and respiratory diseases.

Researchers at Maastricht University in the Netherlands used data from the massive Netherlands Cohort Study to track the dietary habits of more than 120,000 people over a period of 10 years. Analyzed in the study were different types of tree nuts, peanut butter and peanuts, which are technically legumes but share many of the same properties as nuts in terms of fiber, vitamin, antioxidant and fatty acid content. Overall, it was found that people who ate nuts regularly were 23 percent less likely to die from diseases such as diabetes, cardiovascular disease, cancer, stroke and others. The results were even more promising for Alzheimer’s: according to the study, people who ate at least 10 grams of nuts per day reduced their risk of developing a neurodegenerative disease by 45 percent.

It’s important to note that there was no direct correlation between the amount of nuts eaten and the percentage of reduction in risk. In other words, eating more nuts does not guarantee more health benefits. Instead, researchers stated that about half a handful per day was the most effective amount. Also, peanut butter was not found to provide any health benefits, probably due to its sugar, fat and salt content.

Not Everybody’s Buying It

While researchers controlled for many different health effects, some believe that the study simply shows how nut consumption is a marker of an overall healthy diet. Indeed, people who regularly ate the small amount of nuts deemed most beneficial also tended to eat more vegetables, avoid smoking, have lower blood pressure, and maintain a lower body weight. Combine this with the fact that there’s a relatively low upper limit on the amount you should eat each day, and it’s definitely not time to call nuts a “life-extending superfood” just yet.

According to this study, eating nuts in small amounts could go a surprisingly long way toward preventing death caused by many different potential diseases. However, this doesn’t mean that you should rush out, buy nuts in bulk, and start eating a bowl full of them every day. Instead, it’s more likely that the study simply reenforces the notion that a diet including foods rich in vitamins, fiber, antioxidants and unsaturated fatty acids provides health benefits that promote a longer life.