Binge Drinking Rates on the Rise, Especially For Women 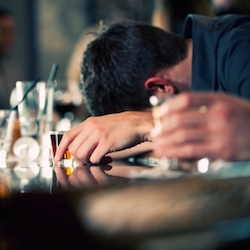 Binge drinking is defined in several different ways. The National Institute on Alcohol Abuse and Alcoholism defines binge drinking as “a pattern of drinking that brings blood alcohol concentration (BAC) levels to 0.08 g/dL.” They point out that it usually takes around five drinks for men and four drinks for women over a period of around two hours to be considered “binging.” The Substance Abuse and Mental Health Services Administration defines binge drinking as consuming “five or more alcoholic drinks on the same occasion on at least one day in the past 30 days.” Using the first definition, the CDC reports that one in six adults in the U.S. binge drinks around four times every month. College students, the group perhaps most notorious for binge drinking, only make up part of the problem – 70 percent of binge drinkers are over the age of 26. According to a new study, things are getting worse.

According to a new report published in the American Journal of Public Health, heavy drinking has risen by 17.2 percent in the U.S. between 2005 and 2012. Researchers point out that changing social norms are likely the cause of the increase, as more and more women are catching up to men when it comes to alcohol consumption. Between 2002 and 2012, the number of women who binge drink increased over seven times more than the rate for men. Interestingly, the nationwide rate for people who drink any alcohol did not change significantly during the ten-year analysis.

It’s common knowledge that binge drinking is detrimental to your health. Along with increasing the risk of developing high blood pressure, stroke and liver disease, too much alcohol can also lead to unintentional injuries, fetal alcohol disorders, unintended pregnancy, violence and sexually transmitted diseases. One study even suggests that binge drinking during adolescence or young adulthood can lead to persistent and permanent abnormalities in the function and structure of certain parts of the brain. It’s not just a health cost either – binge drinking was estimated to cost the U.S. $223.5 billion in the U.S. in 2006 as a result of health care, crime and lost productivity.

Researchers point to several reasons why binge drinking may be on the upswing, including a rise in hard liquor advertising, more affluence in certain areas such as San Francisco, and the fact that alcohol taxes have not gone up proportionately with the Consumer Price Index. If you or anybody you know has a problem with binge drinking, consider checking out these personal steps as your first course of action.