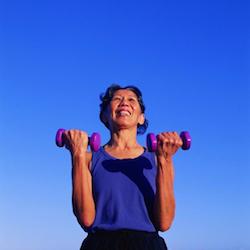 For women over 40, bone health is a serous concern. According to the National Osteoporosis Foundation, 80 percent of the 10 million Americans who suffer from osteoporosis are female. Also, around half of all women over the age of 50 will break a bone due to osteoporosis at some point. It’s thought that bone loss is prevalent in older women due to a menopausal decrease in estrogen, which is known to protect bone health. Bone problems are so common that the chances of an older woman breaking her hip are equal to her risk of breast, ovarian and uterine cancer combined. It’s estimated that 1.5 million people, both men and women, suffer a fracture every year due to weak bones. The good news is that there are many steps that can be taken to promote bone health. The bad news is that older women who are also trying to lose weight could have a harder time preventing bone loss.

A new study appearing in the Journal of Clinical Endocrinology & Metabolism involved 424 people whose ages ranged from 30 to 70. Around 60 percent of the participants were women, and all of them were considered overweight or obese when the study began. The men and women were randomly assigned to one of four different low-calorie diets in order to lose weight. To test the link between weight loss and bone loss, researchers measured the bone density of each participant’s hip and spine over the two-year period of dieting. By the end of the study, the men and women had lost 8 percent and 6.4 percent of their original body weight, respectively.

For menopausal or post-menopausal women, bone loss can be treated by taking certain medications or estrogen under a doctor’s supervision. Women at this age can also benefit from getting enough calcium and vitamin D. The easiest ways to get these is to consume dairy products, get a bit of sunlight (not too much) and take supplements. It should be noted, however, that milk in particular has not always proven to be beneficial for bone health.

If you’re a menopausal woman who’s trying to lose weight, you should take whatever steps are necessary to prevent bone loss while doing so. Simply moving part of your exercise routine outdoors, continuing to eat some dairy products, and taking vitamin D supplements may help avoid losing bone density while you’re busy shedding pounds of fat.