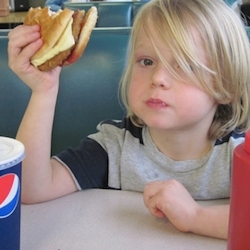 When it comes to the health of children in America, it seems as though there hasn’t been much good news lately. According to the CDC, around 12.7 million children aged 2 to 19 were obese in 2012. Research from last year indicates that overweight children as young as preschool age may already exhibit risk factors for diabetes and heart disease, including high cholesterol, high blood pressure and elevated blood sugar. As recently as this week, it was reported that the vast majority of parents don’t recognize when their child is overweight or obese. Although that study occurred in the UK, it’s likely that similar trends could be occuring in America.

The new research, appearing in the Journal of the American Medical Association, used data collected in the National Health and Nutrition Examination Survey to assess the fast food eating habits of children in the U.S. Overall, it was found that the average amount of fast food calories consumed by children aged 4 to 19 fell by 110 between 2003 and 2010. The percentage of children who eat at a fast food restaurant on any given day dropped from 39 percent to 33 percent during the same timeframe. Calories consumed from chicken, pizza and burger fast food restaurants were down, while sandwich and Mexican fast food places saw a steady amount of consumption.

Researchers state that the findings echo similar eating trends that have been observed in adults. However, it’s unclear at this time whether the downturn is due to consumers making more informed choices or to fast food restaurants cutting calories and offering smaller portion sizes. Researchers did find that people have generally been eating less during each sitting, which means that fast food menu changes could be having more of an effect than previously thought.

Good News With Some Caveats

Of course, just because kids are eating less fast food doesn’t necessarily mean that they’re any healthier. The study did not acknowledge the quality of the calories that were eaten, meaning that children could still end up suffering plenty of negative health effects from fast food despite eating less of it overall. Indeed, researchers pointed out that a decrease in calorie consumption would not be cause for celebration if kids were still getting high levels of sodium, refined grains and added sugar. If kids are replacing the lost fast food calories with even unhealthier snacks, they might actually end up worse off.

Decreasing the amount of fast food your child eats is essential for allowing them to maintain a healthy weight. Also, too much fast food has been linked to poorer grades. While the decrease seen over the past few years is good news, parents must make sure that children aren’t replacing those calories with foods that are just as bad.

2 Responses to Percentage of Kids Eating Fast Food Down in the U.S.