Almost Half Of Americans Believe Flu Vaccines Can Cause the Flu 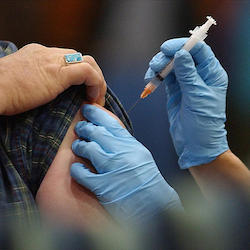 Influenza is a fairly common respiratory infection that often spreads during the winter months. Unlike the common cold, however, it must always be remembered that complications from the flu can be very severe and even life-threatening. The Centers for Disease Control and Prevention estimates that 5 to 20 percent of the U.S. population gets the flu each year, and around 200,000 of those cases require hospitalization. Young children, pregnant women and the elderly have a much higher risk of severe flu complications. Despite the CDC’s insistence that flu vaccines are the best way to prevent infection, only 42 percent of adults got a flu shot in the U.S. last year. With this season expected to be more severe, getting vaccinated will be even more important. However, a surprising new study is shedding some light on why so many people avoid getting a flu shot.

The study, authored by professors at Dartmouth College and the University of Exeter, gathered a nationally representative sample of American adults. The participants were split into three groups and were asked questions about flu vaccines. Before answering the questions, the first group was given information about health risks that the flu presents. The second group was given information about how flu vaccines cannot cause the flu. The third group was not given any information. After the study was complete, it was found that 43 percent of participants believed the flu vaccine could cause you to get the flu. People in the second group who received information that debunked this myth were less likely to report believing it. Information about the risks of the flu, given to the first group, did not seem to change any respondents’ intentions to vaccinate.

Strangely, people who reported having a “high concern” about the side effects of flu vaccinations actually became less likely to get a flu shot after hearing the corrective information. People who were less concerned about possible side effects experienced no change in their intention to vaccinate after getting the same information.

It’s not entirely clear where the myth about flu vaccinations giving you the flu came from. It doesn’t have any celebrity endorsers like the “vaccines cause autism” myth has. Some flu vaccines do contain flu viruses, but the viruses have been inactivated and are not infectious. The CDC points to two studies in which it was shown that redness and soreness at the injection site are the only differences in side effects between flu vaccines and salt-water shots. Other minor side effects that could occur with flu shots include:

Flu vaccines that are administered as a nasal spray contain weakened viruses that cannot give you the flu. Side-effects for these types of vaccinations can include nasal congestion, cough and runny nose.

The belief that flu shots actually give you the flu is simply untrue. However, this study shows that simply trying to combat the myth with corrective information will not necessarily change the minds of those who are most concerned. Whatever informational approach medical professionals take in the future, the CDC recommends that all adults get a flu shot every year to prevent the potentially serious complications that arise with new mutations of the influenza virus. Flu shots are often provided by many institutions for free. To find out where you can get a flu shot in your area, check out this vaccine finder.