Can a Mediterranean Diet Slow the Aging Process? 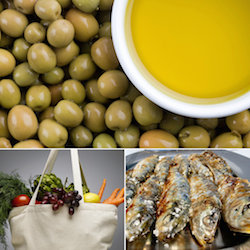 The Mediterranean diet does not consist of a specifically defined diet plan. Instead, dieters attempt to emulate the eating habits of people who live in the various countries bordering the Mediterranean sea. The diets of people in these regions vary greatly, of course, so the Mediterranean diet ends up consisting of a few loosely defined rules. For starters, the diet is focused mainly on vegetables, fruits, bread, beans, potatoes, nuts and seeds. Red meat is consumed very rarely, and poultry and fish are eaten in low to moderate amounts. A staple of the Mediterranean diet is olive oil, which is used to replace unhealthier fats like butter. Herbs and spices replace salt, and red wine can be consumed in moderation if desired. Although the diet contains more fat than the AHA recommends, some people adopt it to prevent heart disease. Now, a new study suggests the diet could increase life expectancy.

The new study, published in the British Medical Journal, assessed the eating habits of 4,676 women who were part of the Harvard Nurses’ Health Study. It was found that the women whose eating habits more closely exemplified a Mediterranean diet had longer telomeres, which protect the ends of chromosomes within cells of the body from disintegrating. It’s generally believed that longer telomeres are associated with longer life expectancy. Health issues such as obesity and smoking are thought to accelerate the shortening of telomeres, and short telomeres have been linked with heart disease and cancer.

It’s thought that Mediterranean diet staples such as fish, vegetables and wine can protect against cell aging due to their high amount of antioxidants. It’s not really known at this point, however, if the Mediterranean diet can add years onto one’s life itself or if it simply prevents diseases that cut a person’s life short. Indeed, a study published last year in the New England Journal of Medicine indicates that the Mediterranean Diet can significantly decrease the risk of cardiovascular disease.

Not Everybody’s Buying It, Though

In a detailed piece in Forbes, medical journalist Larry Husten outlines some of the reasons why the newest study might not exactly be cause for celebration. He explains that the results of the research are limited due to the fact that the Nurses’ Health Study is an observational study. This means that there could be many important differences between the Mediterranean diet followers and the others in the study that were not accounted for. Also, it hasn’t been definitively proven that long telomere length is a necessary goal for human health. Not to mention, telomere length was only recorded once in the study. Many scientists believe that the rate at which telomeres shorten is more significant than their actual length at any given time.

While the results of this study are encouraging, they are slightly flawed. Nevertheless, the Mediterranean diet has proven in several studies to decrease the risk of life-threatening diseases. At the very least, the diet could present a healthier alternative to your current diet that would still provide many delicious flavors you may already be accustomed to. Watch out for fat content in this diet, however – even countries on the Mediterranean have obesity problems.