A bit of good news for the health community today: the Centers for Disease Control and Prevention has reported that smoking rates in America are the lowest they’ve been since the CDC began keeping records in 1965. Between 2005 and 2013, the amount of people who consider themselves to be “current cigarette smokers” dropped from 20.9 percent to 17.8 percent. This means that around 3 million fewer people are smoking now than were doing so in 2005. People who considered themselves “daily smokers” decreased from 16.9 percent to 13.7 percent during the same timeframe as well. According to the report, smoking continues to be more prevalent in males, adults aged 25 to 44, residents of the Midwest, those who live below the poverty line, and individuals who have lower levels of education. Despite the fact that this data came from self-reporting surveys, it’s still encouraging.

According to the director of the CDC’s Office on Smoking and Health, Tim McAfee, smoking rates can be decreased further and faster by taking certain steps. The strategies he proposes include increasing tobacco product prices, increasing funding of tobacco control programs, creating effective media campaigns, and implementing further smoke-free laws. Despite the downward trend in smoking rates, around 443,000 Americans still die each year from tobacco-related illnesses such as cancer, lung disease, heart disease and respiratory infections. The cost of all these health conditions adds up to around $193 billion each year in the U.S. Also, a smoking rate of 17.8 percent is still a far cry from the Office of Disease Prevention and Health Promotion’s goal of 12 percent by 2020.

The CDC reports that alternate sources of tobacco such as hookahs and cigars are becoming more popular among teens and young adults. In fact, one in five high school students reports at least having experimented with smoking. Aside from tobacco products, e-cigarettes have also exploded in popularity over the past few years. While they don’t contain tobacco, e-cigarettes aren’t necessarily known to be a safer option due to the lack of research and regulations concerning their health effects.

Geographic location seems to be a significant factor for smoking rates among Americans. Utah consistently has one of the lowest smoking rates, which is often attributed to the largely religious population there. Appalachian and Midwestern states often have significantly higher smoking rates. Check out this chart courtesy of Gallup: 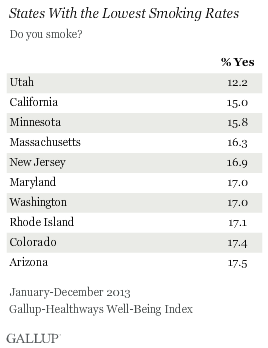 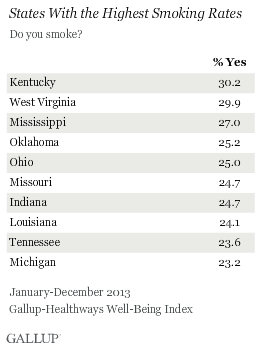 Health conditions such as cancer, emphysema, heart disease and stroke are life-threatening diseases that smoking can cause. The real shame here is that any smoking-related disease is completely preventable. Also, smoking is well-known to harm non-smokers, especially young children, who simply inhale others’ secondhand smoke. Personal responsibility and education is a must if the smoking rates are going to decline further. For help with quitting, check out Smokefree.gov.