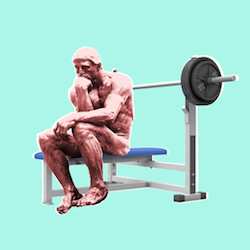 The one thing most of these studies have in common is the type of exercise that’s proven to be beneficial (aerobic, usually). This leaves us wondering – could resistance training also affect brain function in any positive ways? Turns out the answer is yes. According to a study recently published in the journal Acta Psychologica, just 20 minutes of weightlifting can improve memory – even in young, healthy people.

The new study, conducted by researchers at the Georgia Institute of Technology, was unique in that it had participants exercise after their memory test instead of before. Here’s how it worked: test subjects looked at a set of 90 photos on a computer. The participants were not told to try memorizing the photos. Then, everyone was split into two groups: active participants and passive participants. There were 23 people in each group, and the average age of both groups was around 20. The active group then exercised at a leg extension resistance machine, doing 50 reps each at their personal maximum weight. Researchers monitored heart rates and blood pressure, and they took saliva samples in order to detect stress signals. The passive group did not exercise.

Participants were invited back to the lab after 48 hours to be shown the photos again. This time, however, the photos were mixed in with 90 other different photos. People in the active group were able to recall about 60 percent of the original photos, while people in the passive group only recalled around 50 percent. Researchers noted that 10 percent was a significant increase for episodic, or long-term, memory.

The notion that weightlifting can improve memory is thought to be related to the fact that short, stressful activities have actually been proven to increase memory in general. For example, this study, conducted at the University of Buffalo, suggests that corticosterone released in the brain during acute stressful events can actually have beneficial effects on the prefrontal cortex of the brain, which controls emotion and learning. Researchers in the Georgia Tech study noticed through saliva samples that participants had increased levels of certain hormones during their exercise, which corroborated other studies showing that those hormones could improve memory. On the other hand, it’s generally agreed that long-term stress can have detrimental effects on the brain.

The fact that just 20 minutes of weightlifting can improve memory is great news. At the same time, the study does not make it clear whether or not lifting weights for longer periods of time will have an even greater effect. Researchers plan to expand the study sometime in the future. Until then, this is just another reason to add even just a bit of weightlifting to your exercise routine.