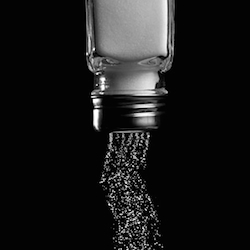 The most recent issue of the New England Journal of Medicine contains three separate studies regarding salt, and the findings range from predictable to downright controversial. The first study, funded by the Bill and Melinda Gates Foundation, concluded that 1.65 million deaths across 66 countries in 2010 could be attributed to cardiovascular problems stemming from salt consumption of over 2.0 g per day. The second study examined sodium excretions in over 100,000 people from 18 countries. It concluded that the association between sodium consumption and high blood pressure was most pronounced in the elderly, people with hypertension, and those who consume more than 6.0 grams of salt per day. The third study, on the other hand, concluded that consuming too little salt could also lead to cardiovascular events. It is this study that’s causing an uproar.

The American Heart Association currently recommends that Americans consume no more than 1,500 mg of sodium each day. However, the third study indicated that those who consume 3,000 to 6,000 mg per day actually have a lower risk of cardiovascular events and death than those who get more than 6,000 mg or less than 3,000 mg. The study showed that only 4 percent of participants in the 18 countries examined actually adhere to the AHA’s recommended salt consumption level. In fact, 75 percent of Americans have diets that are actually within the 3,000 to 6,000 mg “safe zone.” The senior author of the study, Salim Yusuf, stated that going down to the AHA’s recommended levels could actually be harmful.

The findings echo an Institute of Medicine report from May of last year, which indicated that the AHA’s setting of the maximum daily intake of sodium at 1,500 mg is not necessarily supported by scientific evidence. Yusuf encourages the makers of the guidelines to take such factors into account when creating their daily allowances. The chairman of the IoM, Brian Strom, has also said that the 1,500 mg guideline for salt consumption is “unrealistic and extreme.”

Study May Have Been Controversial on Purpose

Not all researchers are on board with these findings. One cardiologist from Boston’s Brigham and Women’s Hospital has stated that the study has a fundamental flaw. During the study, sodium levels were measured using a single urine test for each participant instead of testing each person several times over a period of 24 hours, which is typically the preferred method. Also, some physicians claim that Yusuf’s study could be affected by commercial interests. With such a big push from governments to reduce the amount of sodium in foods, it’s possible that studies such as these could be presented in order to soften public opinion. One researcher from the University of Calgary, Norm Campbell, commented to CTV that the tobacco industry has used similar tactics in the past to try swaying public opinion with pro-cigarette papers.

This study is also not necessarily new – Yusuf has presented similar findings as far back as 2011.

Unfortunately, the results of this study will likely just lead to confusion for consumers. One thing that all the studies agree on is the fact that 6,000 mg of sodium per day (and higher) is definitely too much. On the other hand, the body does indeed need salt to function, and reducing salt consumption to zero is not only unrealistic but also possibly dangerous. For now, it would be wise to continue to adhere to the AHA’s guidelines until more research is done. At the very least, cutting down on processed foods can go a long way towards reducing salt consumption and avoiding a host of potential health problems.