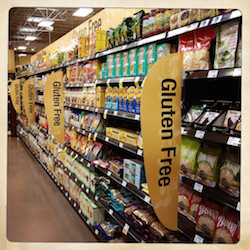 Before today, foods labeled “gluten-free” were not subject to any regulations or standards ensuring that the claim was true. Now, FDA regulations state that gluten-free products must be packaged in a “truthful and not misleading manner.” This means that such foods can only use the label if they contain gluten in a ratio of less than 20 parts per million. The news is particularly good for those suffering from celiac disease, who can get very ill after eating food that contains even a small amount of gluten. The protein is most often found in wheat, rye and barley. Some people that do not have celiac disease claim to suffer from a sensitivity to gluten that can cause intestinal issues, headaches, and respiratory problems. The existence of a “gluten sensitivity” from a scientific standpoint is up for debate, however. Further, some claim that gluten is not the culprit at all, but rather other elements in wheat that make people sick.

Previously, it was up to manufacturers to decide exactly what “gluten-free” meant. Now, the FDA indicated that manufacturers failing to meet their requirements will end up facing “regulatory action.” The new rule was issued in August of last year but has not been enforced until today. Food companies will have until one year from now to comply entirely with the new regulation.

According to the Director of the Center for Celiac Research at MassGeneral Hospital, research indicated that 1 in 133 people in the U.S. had celiac disease as of a decade ago. At the same time, many people were not even aware that celiac disease was a problem. It’s not currently clear why the numbers have rose so sharply – some researchers believe the the condition was underdiagnosed, while others maintain that people are simply eating more processed wheat products than ever before. Celiac is known to cause bloating, abdominal pain and diarrhea, as well as weight loss, rashes and fatigue if gluten is consumed over a long period of time.

In 2004, Americans spent around $560 million on gluten-free products. Last year, however, that number rose to $4.2 billion. Some project that the amount spent on gluten-free food could top $6.6 billion by 2017. Much of this is increase is due to the fact that maintaining a gluten-free diet has also become “fashionable.”

Does Going Gluten-Free Help Those Without Celiac?

Research is divided on whether or not people who do not have celiac disease should try going gluten-free for health reasons. Some people have adopted the diet in an attempt to lose weight. Also, according to one University of Florida study, some people eat a gluten-free diet because they believe it will improve overall health, digestion, or skin/complexion. Thirty-seven percent of participants were certain that gluten-free products were more healthy than similar foods that contented gluten. Research has not exactly proven that any of these claims are true, however. In fact, some believe that people who refrain from eating gluten could be missing out on certain vitamins and proteins that are essential for good nutrition.

The new FDA regulations are excellent for those suffering from celiac disease. At the same time, it will further ensure that those eating a gluten-free diet without suffering from celiac will not be getting the potential benefits of gluten. Both sides of the issue are vehement – some people believe that gluten is hazardous for all humans, while others view “gluten-free” as something of a punchline. More research will need to be done before it can definitively be said whether or not a gluten-free diet is healthy or simply a fad that should be avoided.