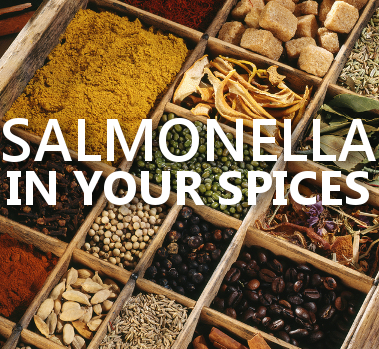 Although you may think of raw chicken and improperly handled produce as the most likely foods to contain salmonella and other dangerous contaminants, you may be just as likely to find bacteria that could make you or your family violently ill right in your spice pantry.

According to a recent report from the Food and Drug Administration (FDA), 7% of imported spices contain salmonella, while a whopping 12% contain filthy items like bugs and rat hair.

In speaking to the New York Times, FDA food and spice official Jane M. Van Doren said that the report should be a “wake-up call” to companies that manufacture and import spices. If the problems aren’t solved, more people could be affected by these dangerous contaminants.

Are Spices Too Risky?

The FDA’s examination of the imported spice industry lasted three years, and over the course of that time they detected over 80 different strains of salmonella in various spice shipments shipped to the U.S., many of which weren’t allowed past U.S. borders at all.

About 1.2 million Americans get sick with salmonella poisoning each year, and that figure is just based on reported data. It’s likely that many more cases go unreported, especially since so few people consider that they could be contracting the illness through dried spices. In addition, many salmonella-containing spices probably cause no overt harm at all because the quantity consumed is usually so low, not to mention the fact that many dried spices are subjected to intense heat during cooking before they’re consumed. This heat kills the salmonella bacteria.

Although it may seem easy to avoid salmonella poisoning by avoiding imported spices altogether, the reality is that the vast majority of spices consumed in the U.S. are sourced internationally. India and Mexico have the highest contamination rates according to the FDA, and nearly 25% of all food colorings, oils and spices originate in India. If you buy spices off the shelf at a typical grocery store or eat a meal in practically any chain restaurant, chances are good that you’re consuming imported spices.

Of course, one way to avoid imported – and therefore potentially contaminated – spices is by purchasing organic spices from your local gourmet grocery store, health food store or food co-op. Ask the staff where the particular spices you’re considering originate, and only purchase if you’re confident in their answer.

At the same time, the FDA doesn’t recommend that people stay away from imported spices altogether. The organization is currently implementing new rules which should improve the safety of spices brought in to the United States.

About 7% of all imported spices contain salmonella, according to a recent report from the FDA.