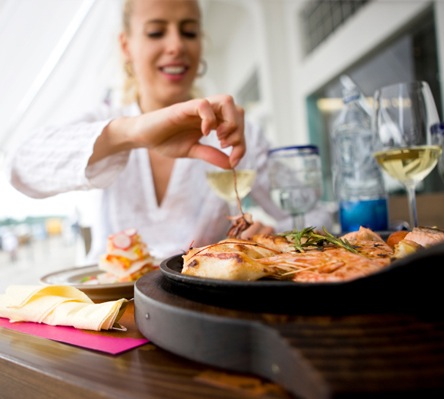 Chinese researchers recently conducted an extensive, comprehensive review of 26 studies, concluding that the more omega-3 fatty acids from fish that a woman consumes, the lower her risk for breast cancer plummets. The studies involved a total of 880,000 adult women from countries across the world, 20,000 of whom were diagnosed with breast cancer. Overall, the researchers found that women in the studies who consumed the greatest amounts of omega-3s from fish were about 14% less at risk for developing breast cancer than women who consumed the least.

Omega-3 fatty acids are found in the highest concentrations in filets of oily fish, such as salmon. Unfortunately, a different type of omega-3s that’s found in plants did not have the same anti-cancer effect.

In 2009, a large-scale review of 48 studies was unable to conclude whether cancer or heart disease risk are influenced by the levels of omega-3 fatty acids a person consumes. Individuals in these studies received omega-3s through food, supplements or both. Although the researchers behind the report didn’t suggest that people shouldn’t eat omega-3s, they didn’t find enough evidence to suggest that they should, either.

However, it’s possible that these studies were inaccurate because they failed to look at what other types of fat individuals consumed aside from omega-3 fatty acids. A marked reduction in breast cancer risk was observed in a 2002 study for women who ate roughly the same amount of omega-3 fatty acids and omega-6 fatty acids.

The new review by Chinese researchers looked at two types of studies: ones that assessed omega-3 intake based on the amount of fish eaten, and ones that did so using a blood test.

The researchers agreed that the study results may have been influenced by pollutants, including heavy metals, mercury and pesticides, present in some of the fish consumed by study subjects. These pollutants may reduce the anti-cancer properties of omega-3 fatty acids or increase cancer risk on their own, according to the researchers.

Consuming plenty of omega-3 fatty acids, which are found in high concentrations in oily fish such as salmon, may significantly reduce your risk of developing breast cancer, according to a recent review of over 25 studies.

The full text of the review can be found online in the British Medical Journal.