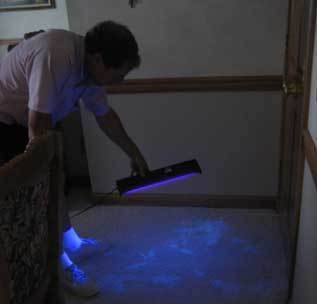 Summer is finally upon us, and for many that means traveling to vacation spots around the country and staying in hotels along the way. Unfortunately, staying in a hotel room is much different than staying at home, since there’s no telling who stayed in your room the night before, what sort of hygiene they maintained, and whether the hotel staff did a sufficient job of cleaning up before you checked in.

Thankfully, a new hotel cleanliness study indicates that you can greatly cut down on the amount of germs to which you and your family are exposed in a hotel room so long as you know where to look and what not to touch. You may be surprised to find out where exactly the highest concentration of contamination was located, but luckily, the contaminated items allow for the needed germ protection to be relatively simple to accomplish.

In order to conduct their study, researcher Jay Neal and other microbiologists at the University of Houston swabbed various areas of several different hotel rooms in order to collect bacteria samples.

The researchers expected to find the highest bacteria concentrations on areas such as the sink and toilet, and while these areas were indeed contaminated, extremely high levels were found in other places as well. In fact, two of the most contaminated items tested by the researchers included light switches for bedside lamps and the remote control for the TV. This makes sense given that these are two of the items that virtually all hotel guests touch at least a few times during their stay.

According to Dr. Neal, there’s no reason to believe that hotel remotes are any dirtier than the remote you have for your own TV at home. At the same time, Neal points out that hotel remotes are handled by a wide variety of people who may introduce several different types of bacteria, some of which may be foreign to your immune system. This would theoretically make you more likely to become ill after handling a hotel remote than the remote you keep at home.

30 Minutes of Cleaning Per Room

According to Katie Kirsh, a student at the University of Houston who was largely responsible for the study, average hotel housekeepers spend an average of 30 minutes cleaning each room. However, Kirsh believes that these 30 minutes could be spent more effectively if housekeepers knew the most contaminated areas on which to focus their efforts, as well as mistakes that lead to additional unwarranted contamination.

For example, Kirsh said that the most contaminated area she tested was not in the hotel room itself, but rather in the housekeeper’s cleaning cart. In particular, the sponge and mop used by the housekeeper were found to have the highest levels of contamination. This is alarming because it indicates that bacteria is being transferred from each room to the next as the housekeeper performs his or her shift.

The researchers said that this type of contamination could be greatly mitigated if the cleaning fluid was replaced more often rather than just in between shifts.

As a general rule, you might consider keeping a small bottle of disinfectant spray with you when you travel. This will allow you to quickly disinfect the dirtiest areas of a hotel room as soon as you arrive. Focus on door handles, light switches and especially the faucet handles for the sink and the shower.

Using a disinfectant spray on the TV remote may not be the best idea, since you risk damaging the electronics and receiving an inflated bill for the damages from the hotel after you check out. Instead, slip the remote into a clear sealable bag upon your arrival. The remote will work just fine from inside the bag, and you’ll be completely protected from any germs.

According to the researchers, the curtain rods, bed headboard and bathroom door handle were among the cleanest areas of the average hotel rooms they tested, so there’s probably little point in disinfecting these areas.

More About the Study

During the hotel cleanliness study, the researchers tested for two separate types of bacteria: general bacteria and coliform bacteria, the latter of which is found in fecal matter and more likely to lead to illness. In both types of tests, it was found that hotel bacteria levels were 2 to 10 times greater that what’s acceptable in a hospital setting. Of course, being exposed to bacteria is something that happens all the time. When exposure levels are especially high, however, you’re more likely to get sick.

The study did have one limitation in that it only included nine hotel rooms in North Carolina, Indiana and Texas. Future research will likely test more hotel rooms in other states.

The researchers presented their findings just yesterday at a San Francisco microbiology conference. The findings have yet to undergo the peer review process, after which they may appear in a medical journal.

According to a new study, some of the most bacteria-rich areas in a typical hotel room include the light switches and the TV remote. The cleaning utensils used by housekeepers also have extremely high levels of bacterial contamination.