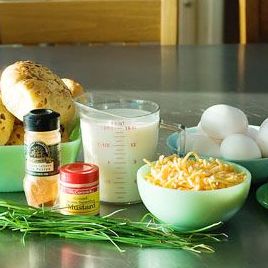 Current health and fitness wisdom dictates that if you want to lower your chances of acquiring a debilitating disease such as heart disease or cancer, to name a few, you’d better be getting your daily dose of antioxidants. Antioxidants are like kamikaze compounds that seek out and destroy free radicals (an oxygen atom that is missing an electron) in your body, helping to protect cells from the damage they’d incur otherwise.

When individuals think of rich sources of antioxidants, colorful vegetables and fruits such as blueberries and pomegranate immediately come to mind. That makes sense, considering that antioxidants were first discovered by scientists in these types of foods. Nutritional science has come a long way since then, however, and we now know that antioxidants can be found in a wide variety of foods.

According to Dr. Joe Vinson, an analytical chemist specializing in the measurement of food antioxidant levels at the University of Scranton, eating a “diverse diet” of antioxidant-rich foods is the best way to enjoy the “entire spectrum of benefits” available. Here are six antioxidant sources that you might not expect:

According to Vinson, popcorn contains approximately four times as many polyphenols as what you’d find in an average serving of fruit. Polyphenols are powerful plant compounds that work as anti-cancer agents. As a bonus, popcorn is 100% whole grain, making in an ideal source of complex carbohydrates.

Your best bet is to pop it at home with fresh whole kernels, allowing you to decide how much oil, butter and salt to use. Homemade popcorn is usually much healthier than the microwave variety, which often contains preservatives, additives and various artificial flavorings.

Much like olive oil, canola oil is considered a “good” oil with positive health effects on the heart. Canola oil is less expensive than olive oil, and it also has a milder flavor and a higher smoke point – making it perfect for popping popcorn!

Canola oil is packed with alphatocopherol, a powerful antioxidant known to prevent LDL (“bad”) cholesterol from oxidizing. Oxidation results in free radicals, which can lead to chronic conditions such as cardiovascular disease. According to the CDC, about one-third of individuals have low alphatocopherol levels. You can help to meet your quota by using canola oil any time you bake, or when you’re sauteing something that calls for a neutrally flavored oil.

On paper, eggs don’t appear to have a high antioxidant content. In fact, a single egg contains only 5% as much lutein (a compound known to protect the health of your eyes) as a quarter-cup of spinach. However, your body is able to absorb those antioxidants three times more easily when you get them from an egg instead of spinach.

This may be due to the absorption properties of the fat found in the egg’s yolk. As such, an egg omelet with a couple handfuls of spinach is an incredibly antioxidant-rich snack that’s easy to prepare, low in cost, delicious and filling.

The next time you’re in the spaghetti aisle, look for pastas labeled “whole grain” and compare them to the ones labeled “enriched” or “refined.” Whole grain pasta, which should have “whole wheat” listed as the very first ingredient, contain three times the antioxidants. This is a similar antioxidant concentration to what you’d find in many other antioxidant sources like fruits and vegetables.

Whole grain pasta contains polyphenols, the same compounds found in popcorn. Eating it can keep your blood pressure down and reduce your levels of “bad” HDL cholesterol.

Organic milk has all sorts of health advantages over regular milk, including bigger doses of antioxidants such as lutein, beta-carotene and vitamin E. How much bigger are the doses? Approximately 40% to 50% bigger when the cows are raised on grass-fed and organic diets.

That’s because the nutrients that the cow consumes through its diet are the same nutrients that get passed into the product. This same logic applies to virtually all grass-fed dairy, including butter and cheese in addition to milk. If you can afford the extra expense, try to go organic and/or grass-fed in all of your dairy purchases.

An excess of sugar in your diet is bad for health, no matter how you consume it. However, researchers are now finding that if you’re going to sweeten your food, there’s a big health difference between using refined sugar (the white granules that you probably put in your coffee) and natural sweeteners such as real maple syrup, brown sugar, honey and molasses. The difference, of course, is that natural sweeteners are loaded with antioxidants.

In particular, the blackstrap and dark varieties of molasses pack the biggest antioxidant punch, though the other aforementioned natural sweeteners aren’t far behind. Darker honeys such as buckwheat, tupelo and sunflower have more antioxidants than lighter varieties such as clover honey.

Berries are great, but they’re not the only way to get big doses of antioxidants in your regular dietary regime. Foods such as organic dairy, whole grain pasta, popcorn, natural sweeteners, eggs and canola oil can provide a huge antioxidant boost as well, and very few of them are what you’d traditionally refer to as “health foods.”

By keeping yourself informed, you can often improve your diet and health without sacrificing flavors or dramatically raising your grocery bill.

2 Responses to 6 Surprising Sources of Antioxidants