4 Sleep Myths that Wear Us Out 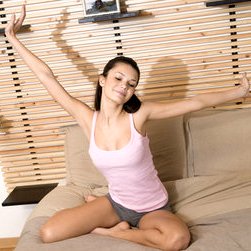 According to the results compiled from a recent clinical survey, approximately 70 million Americans experience regular sleeping problems that prevent them from sleeping soundly throughout the entire night.

Popular misconceptions regarding sleep, including when is the best time to sleep, how long should you sleep, what negatively affects sleep, and just how detrimental it is to miss sleep, are a big part of the problem.

Dr. Holly Phillips, one of Prevention magazine’s leading medical contributors, says that understanding common sleep myths may be the key to getting more shut-eye and enjoying the numerous mental and physical benefits of sleep. Below are four sleep rumors that simply aren’t true.

The Myths about Sleep that have been Proven to be Untrue

Myth #1: Exercising Before Bedtime Will Keep You Awake

Exercise gives you energy, which should therefore make it more difficult to fall asleep, right? Wrong. Studies have shown that even an intense exercise session shortly before you hit the pillow won’t necessarily cause sleep trouble. It may even help some individuals fall asleep more easily.

At the same time, everyone’s different, and some people may indeed experience some restlessness if they exercise within an hour of going to bed. The best practice is to experiment on your own. If your schedule prohibits you from working out earlier in the day, keep a journal and write down when you exercise each day. The next day, update the journal to reflect how well you slept. If you notice that exercising at certain times is preventing healthy sleep patterns, change the timing of your fitness sessions.

Before this myth can be busted, we need to define the length of a “nap.” If you happen to doze, accidentally or intentionally, for more than 20 or 25 minutes, your brain will move into what’s known as “slow-wave sleep.”

This is a deep sleep phase in which your body now expects to be asleep for much longer, such as the 7 or 8 hours that you’d normally expect to get over the course of a full night. Waking up from slow-wave sleep is jarring to the body and mind, and results in disorientation and grogginess instead of alertness and refreshment.

It’s much better to take a significantly shorter nap, to the tune of 10 or 20 minutes. Although you might feel like such a brief snooze couldn’t possibly create a dent in your tiredness on a weary Tuesday afternoon, studies show that it’s exactly enough to perk up most people. The key to squeezing a short snooze into a busy schedule is to fall asleep quickly. These napping tips should help:

Mathematically, sure. However, a recent study showed that “night owls” – those who go to bed at 2am, 3am or even later and awake after noon – are almost three times as likely to suffer from depression symptoms as normal sleepers, who hit the sack roughly between the hours of 9pm and midnight before awaking around or shortly after sunrise. Similar studies have shown that leading a nocturnal lifestyle can be detrimental to your overall health and especially your mood.

Although science hasn’t quite discovered why it’s beneficial to get your 7 or 8 hours at an earlier point on the 24-hour clock, those who are looking to shift the timing of their sleep sessions should start slowly. Try going to sleep 15 or 20 minutes earlier every 2 or 3 days until you hit your target. Avoid bright lights and illuminated screens for at least an hour or two before bedtime.

A recent study showed that losing just 90 minutes of sleep can reduce your alertness the next day by up to 32%, which could impair your thinking ability and memory, and reduce your performance behind the wheel of a car.

Another study, conducted in Australia, showed that participants who stayed up for 6 hours past their typical bedtimes even for a single night had the reaction time of someone who is legally drunk the following day. According to the National Sleep Foundation, 1.9 million drivers were involved in or almost involved in a car accident as a result of drowsiness in 2009.

If you go a night without sleep or with very little sleep, consider taking a sick day off of work the following day. If that’s impossible, be sure to eat several small, wholesome meals throughout the workday to stabilize your blood sugar, and make time for miniature exercise sessions to periodically boost your alertness. Squeezing in a 20-minute nap during lunch should help as well.

Getting a proper amount of rest shouldn’t be an insurmountable challenge, especially when you can differentiate sleep fact from sleep fiction. Regular napping is an excellent idea, so long as you can restrict your snoozing to sessions lasting 20 minutes or less.

Establishing solid sleep patterns is highly important to your overall health, as even a single night with poor sleep can effectively ruin your alertness and thinking capacity over the following days. Getting to bed earlier should definitely help, and squeezing in a brief exercise session shortly before bed shouldn’t hurt.